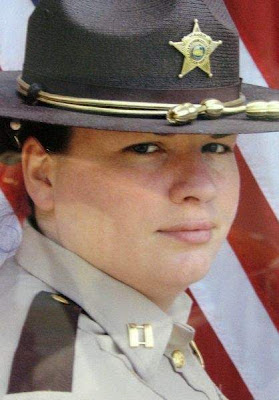 ..."This is on behalf of (Christine's) daughter and not the family trying to make a dollar. Chrissie was the primary parent in the child's life, and now she's gone," Clark said. "The only heir to this, by law, is the daughter, and John. Our argument is that he won't be able to take over the estate because he contributed to the death of Christine"...

Previous posts:
HARRISON DEPUTY PLACED ON LEAVE
Louisville Courier-Journa
By Grace Schneider
September 24, 2009
[Excerpts] Harrison County Sheriff’s Deputy John Britton has been placed on administrative leave. The move follows reports this week that the family of Britton’s late wife, Christine, has notified Sheriff Mike Deatrick and county officials of plans to file a wrongful death lawsuit seeking damages in excess of $700,000 on behalf of her estate. Christine Britton, a former Harrison jail commander, fatally shot herself in March... Britton declined to comment Thursday. Neither Deatrick nor newly appointed Police Chief Joyce Deatrick, the sheriff’s wife and second in command, could be reached... Christine Britton died of a self-inflicted gunshot wound in March at the couple’s home. Indiana State Police investigators said John Britton admitted leaving his handgun in the room when his wife threatened to shoot herself during an argument. Police reports did not say the handgun was John Britton’s service weapon, but the family contends it was. In addition to Deatrick, the sheriff’s department and its employees, the civil wrongful death action targets the Harrison County commissioners and council. Clark said Christine Britton died without a will, which under state law makes her husband and Christine’s 13-year-old daughter eligible for the proceeds of her estate. A wrongful death finding against John Britton would disqualify him, Clark said. Harrison County Prosecutor Dennis Byrd and his chief deputy, John Colin, have said they may request that a grand jury review the circumstances of Christine Britton’s death. No criminal charges have been filed, however... [Full article here]

BRITTON FAMILY READY TO FILE CIVIL SUIT OVER JAILER’S DEATH
Louisville Courier-Journal
By Grace Schneider
September 21, 2009
[Excerpts] The family of Christine Britton has notified Harrison County Sheriff Mike Deatrick and county officials that it intends to file a wrongful-death lawsuit in connection with a 28-year-old woman’s fatal shooting last March. The notice — filed in the form of a letter from Britton family lawyer Greg Clark — states that Christine Britton’s estate intends to seek damages in excess of $700,000 resulting from “wrongful acts” by Harrison County and the sheriff’s department and its employees... Harrison County Commissioner James Goldman said he empathizes for Christine Britton’s relatives and understands their need “to search for answers,” but he doesn’t think the county commissioners or the county council are culpable. No criminal charges were filed. Blood evidence at the scene supported John Britton’s assertions that he had left the room moments before Christine Britton had shot herself once through the head... But the woman’s family has pressed for a full investigation, asserting that John Britton’s admissions raise questions about whether he’s responsible for assisting a suicide. Under state law, it’s a felony punishable by two to eight years in prison and a $10,000 fine to assist someone who is known to be suicidal by providing the means for that person to attempt or commit suicide... [Attorney representing Christine Britton's family Greg] Clark’s letter states that Christine Britton was survived by a daughter, a minor from a former relationship for whom Christine Britton was responsible for supporting. The girl’s grandmother and Christine’s mother, Charlotte Hitner, was appointed personal representative of Britton’s estate in Harrison Circuit Court and is expected to pursue the claim... [Full article here]

WRONGFUL DEATH SUIT SEEKS $700,000
Britton family files against sheriff, county
Corydon Democrat
Alan Stewart
September 23, 2009
[Excerpts] An estate has been opened for the purpose of bringing a wrongful death action against Harrison County Sheriff G. Michael Deatrick, the Harrison County Board of Commissioners and the Harrison County Council. Greg Clark, an attorney representing Christine Britton's family, confirmed the notice was filed Sept. 17 in Harrison Circuit Court on behalf of the estate of Christine Britton... "This is on behalf of (Christine's) daughter and not the family trying to make a dollar. Chrissie was the primary parent in the child's life, and now she's gone," Clark said. "The only heir to this, by law, is the daughter, and John. Our argument is that he won't be able to take over the estate because he contributed to the death of Christine."... The Notice of Tort Claim says, "Officer Britton, having knowledge that his wife intended to commit suicide, provided the firearm to Ms. Britton used to take her own life." Indiana Code 35-42-1-2.5, pertaining to assisted suicide, says that a person who has knowledge that another person intends to commit or attempt to commit suicide and who intentionally provides the physical means by which the other person attempts or commits suicide; or participates in a physical act by which the other person attempts or commits suicide commits a Class C felony. A Class C felony is punishable by a $10,000 fine and two to eight years in prison. The claim goes on to say, "Ms. Britton was an able-bodied woman employed at the time of her death and that by reason of her wrongful death, her estate was damaged and her daughter was permanently deprived of her means of support, affection, and love." [Full article here]
on 9/26/2009