[Palin's Troopergate] Is Abuse of Power "a Governor's Perogative"? 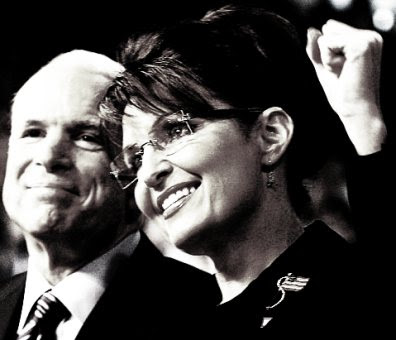 PALIN FIRED THE TOP COP IN THE STATE AFTER HE WOULDN'T FIRE TROOPER WOOTEN - BECAUSE...? SHE SHOULD HAVE TARGETED ALL BAD COPS OR ALL BAD TROOPERS & SWEPT WOOTEN OUT WITH THE REST OF THEM, BUT ADVOCATING ONLY TO GET RID OF HER SISTER'S EX? THAT'S GOING TO BE HARD TO JUSTIFY, AND WORSE TO BE CAUGHT LYING ABOUT.
...[Republican pick for Vice President slot, Alaska Governor Sarah] Palin initially denied that she or anyone in her administration had ever pressured [Top Cop of the State Police, Walter] Monegan to fire [Palin's former brother in-law, State Trooper Mike] Wooten... But this summer, Palin acknowledged that a half-dozen members of her administration had made more than two dozen calls on the matter to various state officials...

Palin Focus of Probe In Police Chief's Firing
Her Family Wanted a Trooper Dismissed, He Says
The Washington Post
By James V. Grimaldi and Kimberly Kindy
Saturday, August 30, 2008; A11
[Excerpts] Republican presidential candidate John McCain's running mate, Alaska Gov. Sarah Palin, is an ethics reformer under an ethics investigation that is plowing through private domestic matters. Palin is under investigation to determine whether she pressured and then fired the state police chief in July because he refused to dismiss her former brother-in-law. At the time, the governor's younger sister was involved in a bitter divorce and child custody dispute with the man, a state trooper. A bipartisan committee of the state legislature voted unanimously to hire a retired prosecutor to investigate. His report is due in October. The firing of state Public Safety Commissioner Walter Monegan has unearthed a stream of private details about the governor, her husband and her family. The state probe is also focusing on a half-dozen top state officials accused of trying to drive trooper Mike Wooten from the force. Critics say the episode -- dubbed Troopergate in Alaska -- cuts against Palin's reputation as an ethics crusader who holds even her own party accountable... The domestic dispute entered the public arena when the governor's sister filed for divorce from Wooten on April 11, 2005. The same day, the governor's father, Chuck Heath, contacted state police with several allegations against Wooten: using a Taser on his 10-year-old stepson; shooting a moose without a permit; and drinking beer while driving a patrol car. Eighteen months later, Sarah Palin became Alaska's first female governor. Gov. Palin's husband, Todd Palin, met with Monegan in January 2007, a month after his wife took office, to say that the trooper was unfit for the force. Monegan also said the governor sent him e-mails, but Monegan declined to disclose them, saying he planned to give them to the independent prosecutor. Palin initially denied that she or anyone in her administration had ever pressured Monegan to fire Wooten. She said she had raised the matter with Monegan just once, relaying the allegation that Wooten made a death threat against her father. But this summer, Palin acknowledged that a half-dozen members of her administration had made more than two dozen calls on the matter to various state officials... Monegan said Todd Palin told him that Wooten "shouldn't be a trooper." "I've tried to explain to him," Monegan said, "'You can't head-hunt like this. What you need to do is back off, because if the trooper does make a mistake, and it is a terminable offense, it can look like political interference.' I think he's emotionally committed in trying to see that his former brother-in-law is punished." Monegan said he was also contacted by three other Palin-appointed officials, including the attorney general, regarding the trooper. Each time, he said, he told the administration officials that he would keep an eye on the trooper, but that unless he violated a rule, nothing could be done. In a TV interview in July, Todd Palin confirmed that he had talked with Monegan but said he was just "informing," not pressuring. At a news conference Aug. 13, the governor said, "I do now have to tell Alaskans that such pressure could have been perceived to exist, although I have only now become aware of it"... John Cyr, chief of the troopers' union, said he was "shocked and disappointed" at McCain's selection of Palin. "It goes well beyond the fact that she is under a cloud of ethics investigations. She's fired the only commissioner who dared to stand up and say we need to do more to make Alaska safe." Palin's chief of staff fired Monegan on July 11, telling him Palin wanted "to go in another direction," Monegan said... [Full article here]
on 8/31/2008