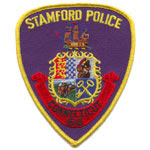 Back in May Stamford Police Officer Dennis Onacila and his wife Kay were arrested for domestic violence after the wife stepped in to protect her daughter. At that time his wife said she was afraid for their safety because Officer Onacila keeps guns in the bedroom. The guns were reportedly removed, they spent a night in jail, and they were to go back for a hearing, but I never saw any updates after that. All I know is that he's still listed on the department's web page as one of just a few training officers. Also he's been with the department for 19 years so his actual rank may or may not be "officer."
on 8/31/2008