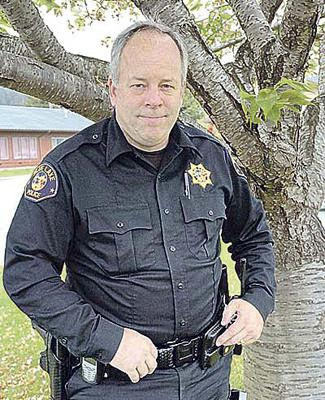 DAVID GUNDERSEN'S WIFE FEARED THE FORMER BLUE LAKE POLICE CHIEF WOULD KILL HER IF SHE TESTIFIED... ”SHE WAS PETRIFIED,” GRIEGO CONTINUED, ADDING THAT HE PROBABLY SPOKE TO HER ABOUT 100 TIMES OVER TWO MONTHS. “SHE WAS SHAKING AND IN TEARS MOST OF THE TIME I TALKED TO HER”... GUNDERSEN FACES TWO DOZEN COUNTS OF RAPING SEAL WHILE SHE WAS UNDER THE INFLUENCE OF AN INTOXICANT, AS WELL AS CHARGES OF VIOLATING A COURT ORDER, ATTEMPTING TO DISSUADE THE VICTIM OF A CRIME AND ILLEGALLY POSSESSING A SUBMACHINE GUN AND A PISTOL WITH AN ATTACHED SILENCER...

Previous entries:
GUNDERSEN’S EX-WIFE TAKES STAND
The Eureka Reporter
John C. Osborn josborn@eurekareporter.com
Aug 26 2008
[Excerpts] Former Blue Lake Police Chief David Gundersen’s ex-wife testified Tuesday about details of their custody battle and allegations that she formulated a plan to have him arrested to benefit her in the custody decision. She gave details about allegations of rape during their marriage that she made against her husband and her interactions with Darcie Seal, who is the alleged victim in this trial and Gundersen’s current wife. It is The Eureka Reporter’s policy to not disclose the name of sexual assault victims, but Darcie Seal has asked both the court and media to use her real name. Gundersen is charged in this trial with 24 counts of alleged spousal rape with an intoxicant, along with five other charges, including two related to illegal firearms... Although the allegations of rape came out during their on-and-off eight-year custody battle, she testified that she never filed criminal charges because she didn’t want to put her children through such a proceeding. Gundersen’s ex-wife testified that starting in 2006, Seal confided to her that Gundersen was having non-consensual sex with her... This morning, there will be a brief hearing to decide whether Diane Wetendorf, an expert in police-perpetrated domestic violence, will be allowed to testify for the prosecution... [Full article here]

[What reason could they have for NOT letting Diane testify, I wonder aloud.]

GUNDERSEN'S WIFE SPENDS DAY 4 ON STAND
Times-Standard, CA
Thadeus Greenson tgreenson@times-standard.com
08/26/2008
[Excerpts] The WIFE of former Blue Lake Police Chief David Gundersen testified Monday that when she lied to investigators the day of her husband's arrest, she felt they were just holding another “Dave-bashing party.” ”It's not the first time everyone sat around bashing Dave,” Gundersen's wife, Darcie Seal, testified about the Feb. 8 interview with investigators. She referred to them as friends of Gundersen's ex-wife and said she answered their questions sarcastically and never wanted her husband arrested... GUNDERSEN FACES TWO DOZEN COUNTS OF RAPING SEAL WHILE SHE WAS UNDER THE INFLUENCE OF AN INTOXICANT, AS WELL AS CHARGES OF VIOLATING A COURT ORDER, ATTEMPTING TO DISSUADE THE VICTIM OF A CRIME AND ILLEGALLY POSSESSING A SUBMACHINE GUN AND A PISTOL WITH AN ATTACHED SILENCER. He has pleaded not guilty and remains held in the Humboldt County jail on $1.25 million bail. Taking the stand for the fourth day, Seal's testimony ranged from her contact with Gundersen since his arrest to why her story has changed dramatically from her testimony during Gundersen's preliminary hearing. With Gundersen's attorney Russell Clanton continuing his cross examination, Seal testified that she didn't fear her husband before her Feb. 8 interview with investigators, but that they convinced her Gundersen was homicidal and suicidal. Seal said she also told members of the District Attorney's Office that her Feb. 8 statements to law enforcement were false, and that she had even written District Attorney Paul Gallegos a letter on Feb. 25 saying as much. Seal later read the letter before the court. It said she had been coerced by investigators, didn't want to file a criminal complaint and didn't fear her husband... Because of that and the fact that Seal has recanted her earlier accusations against her husband and - mirroring a trend in many domestic abuse cases - Clanton directly asked Seal if she'd been trained as a law enforcement officer on the psychology of victims of domestic abuse and she said she had been. ”Do you have an opinion about whether or not you are a victim of domestic abuse?” Clanton asked. ”Yes -- I am not,” Seal testified... [Full article here]

ATTORNEY: GUNDERSEN'S WIFE FEARED SHE'D BE KILLED FOR TESTIMONY
The Times-Standard, CA
Attorney: Gundersen's wife feared she'd be killed for testimony
Thadeus Greenson
08/27/2008
[Excerpts] David Gundersen's wife feared the former Blue Lake police chief would kill her if she testified against him during his rape trial, her former attorney testified Tuesday. ”She was terrified - she believed this client was going to kill her if she testified,” attorney Patrik Griego said Darcie Seal told him while he represented her in the two months leading up to Gundersen's preliminary hearing. ”She was petrified,” Griego continued, adding that he probably spoke to her about 100 times over two months. “She was shaking and in tears most of the time I talked to her”... She testified that she confronted Gundersen. ”He asked me if I was wearing a wire, and I said 'no,'” she testified, adding that Gundersen then admitted to giving her sleeping pills and having sex with her while she slept. “He said he loved me so much and that's how he expressed his love. That's the only way he could do it.”... Dave Morey, of the sheriff's office where she works, what Seal told her but did not consider filing a police report because she didn't have any proof that Seal's allegations were true. Gundersen's ex-wife also testified that Seal asked her if she had told law enforcement, was happy to hear that she had and that Seal often expressed homicidal feelings. ”Every time I got together with her she talked about killing him,” Gundersen's ex-wife said. “She said she was homicidal”... [Attorney] Griego and Michael Crowley, who represented Seal during Gundersen's preliminary hearing, testified that Seal never told them the allegations against her husband were false, which she claimed to have done while testifying Monday... After Gundersen's trial concluded for the day Tuesday, Gallegos confirmed there is an ongoing investigation into Seal's conduct, but declined to go into specifics... [Full article here]
on 8/27/2008