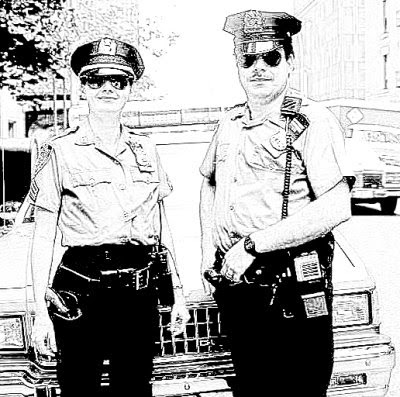 Dating cops a delicate question
Connecticut Post,
Aaron Leo
08/16/2008
[Excerpts] In the wake of a city police officer's arrest in Ansonia on charges of pistol-whipping and kidnapping a female colleague, a member of the Board of Police Commissioners wants the issue of fraternization between officers examined. The board has dealt with officers charged with domestic violence, but the case involving [Bridgeport Police] Officer Andre Orbegozo is different, the panel's vice president, David Hall, said. "We haven't had the opportunity to try a case of domestic violence as it applies to officers dating each other"... While there is no department rule that bars officers from dating each other, Hall said the issue of fraternization has become more urgent since Orbegozo's arrest in June and should be addressed. "I think it brings about problems," Hall said of workplace romances. Orbegozo allegedly took the officer, who is in her 20s, into the woods behind Ansonia High School, where he struck her with a gun, causing a serious laceration. At her request, he then drove her to Griffin Hospital in Derby for treatment, where he was arrested... Orbegozo, 32, of Naugatuck, is charged with second-degree assault with a firearm and second-degree kidnapping and is awaiting trial in Milford Superior Court. He's being held in lieu of $500,000 bond in the MacDougall-Walker Correctional Institution in Suffield, and has been suspended from the department without pay. There is no proposed policy regarding fraternization before the police board, which sets department policy, and Hall didn't know when one might be drafted. But, he said, it should start with research into other departments' policies. "It's something that should be addressed" to the International Association of Chiefs of Police, Hall said. It isn't apparently an issue among some other departments in Fairfield and New Haven counties... Fairfield doesn't have one, but deals with problems if they arise, said Sgt. Jim Perez, spokesman... Ansonia and Derby's departments don't have policies, said spokesmen there. But the issue is something the board's past president, Thomas L. Kanasky Jr., had wanted to address the issue of romance between officers. Kanasky, who resigned from the board June 9 before his term expired, was slated to be replaced... While inter-office romance shouldn't happen, it can't be prohibited, Kanasky said. But officers can learn to deal with it when they're in the Police Academy, and the department can help officers with relationship problems so their work isn't affected. "I would recommend some sort of training or counseling through the academy or beyond to make officers aware of the difficulty of employment relationships"... Before making any changes, the board must first face the question of what to do about Orbegozo. The board can issue any discipline it wants to, including termination, while the police chief can issue a 30-day, unpaid suspension at most. The board's disciplinary hearings are typically held in executive session, unless the accused requests them to be public. At least one case of domestic violence between two city officers was handled in-house. Deputy Police Chief Anthony Armeno was disciplined by the department in 1996 because of allegations that he beat and harassed Assistant Chief Karen Krasicky during a six-year personal relationship. He was found in violation of Police Department rules for failing to obey all laws and conduct unbecoming an officer, and was penalized four holidays. Krasicky suffered a separated shoulder at one point, but declined to press charges in any of the domestic incidents involving her and Armeno, police documents have shown. Krasicky retired in April 2005 to become Plymouth's police chief. [Full article here]
[police officer involved domestic violence oidv intimate partner violence (IPV) abuse law enforcement public safety connecticut state]
on 8/17/2008