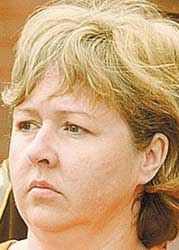 Wife sentenced to life for slaying of trooper husband
Richmond Times Dispatch, VA
By Zachary Reid
Aug 26, 2008
BOWLING GREEN -- Donna Blanton was sentenced to life in prison and fined $100,000 today in Caroline County Circuit Court for the murder of her husband, State Trooper Taylor V. Blanton. Circuit Judge Horace A. Revercomb III said he concurred with the jury's recommendation in the case. Mark Murphy, Blanton's lawyer, commended the sheriff's department for how it handled the case and added that Blanton asked him not to say anything in her defense, or to call any new witnesses. The case marked the second time Blanton had been convicted in her husband's slaying. Blanton had been convicted in 2005 and sentenced to 28 years but won an appeal. The Virginia Court of Appeals last year found that gender wrongly played a role in how the prosecutor at the time selected which potential jurors he did not want to hear the case.
on 8/27/2008