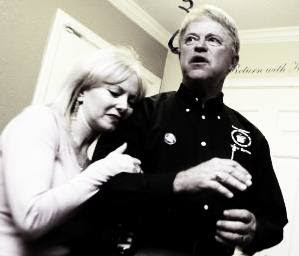 Michelle Berman wants to be clear: she never intended for it to happen this way. But the estranged wife of Gilbert Mayor Steve Berman says she is frightened of him and believes she had no choice... Michelle Berman is Steve's fourth wife, and divorce records going back more than 20 years show a pattern of acrimony and abuse...

GILBERT MAYOR NAMED IN DOMESTIC VIOLENCE REPORT
East Valley Tribune
Dennis Welch
July 11, 2008
[Excerpts] Gilbert Mayor Steve Berman is under investigation by the Maricopa County Sheriff's Office in connection with a domestic violence report... [Gilbert police Chief Tim Dorn] would not reveal who reported Berman, but said police were not dispatched to the mayor's multimillion-dollar house near Lindsay and Guadalupe roads, where he lives with his two children and his wife of six months. Dorn would not say how the incident was reported to police... Last month, Berman narrowly avoided a recall effort because of a miscalculation by the city clerk... [Full article here]

BERMAN DOWNPLAYS DOMESTIC VIOLENCE INQUIRY
East Valley Tribune.
Nick R. Martin, Blake Herzog
July 12, 2008
[Excerpts] Gilbert Mayor Steve Berman on Saturday dismissed a report that he was under investigation by the sheriff's office because of a domestic violence incident... "I haven't been accused of anything... You guys haven't seen a police report. There's nothing to talk about"... Police Chief Tim Dorn said his agency learned of the incident Wednesday and turned over the investigation to the sheriff's office to avoid "any appearance of a conflict." But in doing so, the chief appears to have handed it over to one of Berman's closest political allies, Sheriff Joe Arpaio... Dorn told the Tribune on Friday he handed the domestic violence investigation to Arpaio because the sheriff's office has jurisdiction over the entire county... [Full article here]

GILBERT MAYOR'S WIFE CLAIMS YEARS OF ABUSE
East Valley Tribune.
Mary K. Reinhart, David Biscobing, Dennis Welch
July 15, 2008
[Excerpts] Michelle Berman wants to be clear: she never intended for it to happen this way. But the estranged wife of Gilbert Mayor Steve Berman says she is frightened of him and believes she had no choice. So she’s told investigators, and the Tribune, that Berman has been abusing her, physically and mentally, for years. She finally called friend and Gilbert police counselor Lacy Cox last week, she said, after Steve Berman threatened to kill her father. She says she asked Cox to keep the matter confidential. Still, Gilbert police turned the case over to the Maricopa County Sheriff’s Office. “The next thing I know they’re knocking on my door,” she said. Detectives conducted a tape-recorded interview with Michelle on July 9. “Please make it clear that I wish him no harm,” she said in a telephone interview Monday. “I just wanted a quick, quiet separation and divorce. But because of the threats, I had to report it to a counselor”... Chris Baker, who identified himself as Berman’s political consultant, released a statement from Berman, saying that “at no point have I ever been physically abusive towards her, nor have I ever threatened as she alleges, to kill her or her father.” He said the problems between them stem from her “serious and documentable drug abuse problem”... Michelle Berman told the Tribune two days ago she had struggled with an addiction to prescription painkillers after she broke her foot and her knee but has been clean for three years. “I’m proud to say I fought it and I won,” she said. She said she has the test results that prove it. Michelle predicted Berman would use her previous addiction to deflect the domestic violence allegations... Berman has not been arrested or charged... “We were walking into the bedroom and this guy punched me with all his might, right in the back,” she said. “He begged me for forgiveness.” It was a typical pattern, she said, that began soon after they met at Steve Berman’s Cellular Solutions phone store in 2001. Verbal or physical abuse, Michelle Berman said, was always followed by apologies and promises. The last time she left, Michelle said, he asked her to marry him. And in November, after six years together, she did... [Former Republican precinct committeewoman and longtime friend of Michelle, Staci] Buchanan said Michelle has called her in tears many times and talked of abuse, both physical and verbal. She says she saw bite marks in Michelle’s swollen, purple thumb. Michelle says Berman bit her... [Full article here]

PREVIOUS ABUSE ALLEGATIONS IN BERMAN'S PAST
The Arizona Republic
by Emily Gersema
Jul. 17, 2008
[Excerpts] Gilbert Mayor Steve Berman has divorced twice in Maricopa County, and allegations of violence and abuse emerged in both cases, records show. Throughout the proceedings, Berman's estranged wives and court-appointed evaluators raised concerns about his temper. One expert found Berman was calculating and angry, and strongly urged that he seek treatment. Berman's current wife, formerly known as Michelle Corey, has told the media she will file for divorce due to abuse. Berman, now 60, has no criminal record. He claims the divorce records are inaccurate... No records were found relating to his first marriage. In 1981, Berman married Christine, maiden name unknown... By 1984, she filed for divorce, alleging that Berman was "an unfit, neglectful and abusive parent," and that she feared for her safety and their children's... The couple reached an agreement before trial, agreeing to share custody of their son... Ten years later, Christine accused Berman of hitting his son in the face. Child Protective Services didn't find enough evidence for a formal investigation... Berman married Dawn King a few months after his second divorce. Eight years later, she wanted a divorce. She alleged no abuse in the documents. Accusations emerged in a court-ordered family assessment, which found Berman had violent outbursts and cited domestic violence calls made to police from Berman's home in December 1989 and July 1995. Court-appointed clinical psychologist, Joel Glassman, reported in December 1996 that both parents yelled, but only Berman would physically discipline the children and "frequently lost control of his temper." The older children reported seeing Berman attack the family pet when he was enraged... Glassman advised Berman undergo psychiatric care, including medication... [Full article here]

REPORT DETAILS ALLEGATIONS BETWEEN GILBERT MAYOR, WIFE
Arizona Republic, AZ
by Astrid Galvan
Jul 18, 2008
[Excerpt] ...According to sheriff's documents, Michelle Berman told the counselor that Berman had threatened to kill her and hurt her father. The counselor informed a supervisor, who told Gilbert Police Chief Tim Dorn. Dorn handed the investigation off to the sheriff's office to avoid a conflict of interest... [Full article here]

BERMAN PLOTTED RIVAL’S DEATH, WIFE TELLS POLICE
East Valley Tribune
Dennis Welch
July 18, 2008
[Excerpts] Gilbert Mayor Steve Berman plotted to kill Councilwoman Linda Abbott years ago because he blamed her for his 1993 defeat in a council race, the mayor’s estranged wife told Maricopa County sheriff’s investigators... that all of the charges leveled by Michelle Berman to investigators are “outrageous and driven by her long-term and verifiable addiction to prescription painkillers”... Michelle Berman is Steve's fourth wife, and divorce records going back more than 20 years show a pattern of acrimony and abuse. His third wife, Dawn Berman Schackner --filed two orders of protection against Berman alleging threats of violence... Wife No. 2... Christine Berman moved out and filed for divorce less than three years after their 1981 marriage. In court documents, she sought custody of the children, saying she feared for her safety and that of her children due to Berman’s “violent temper and repeated acts of mental and physical abuse and harassment.” In response to Berman’s resistance to paying alimony, Commissioner Joel Glynn found in 1985 that Christine Berman had been unable to work, in part, because of “injuries sustained by an assault from respondent/husband.” Berman also balked at paying child support, but offered to let his wife and children share the survival meals he had stockpiled at his home, according to court records... [Full article here]

JUDGE TO BERMAN: STAY AWAY FROM ESTRANGED WIFE
East Valley Tribune
July 24, 2008
Nick R. Martin
July 24, 2008
[Excerpt] A judge has ordered Gilbert Mayor Steve Berman and his 26-year-old son to turn over their guns to authorities and stay away from the mayor's estranged wife after she accused him of years of physical abuse. Michelle Berman, 45, filed paperwork in Maricopa County Superior Court on Tuesday saying the mayor repeatedly injured her during their six-year relationship and that his son, Steve Berman Jr., threatened her. The judge granted her requests for protection, forbidding the mayor and his son from calling her, going to her house or having any other contact with her. The two protective orders from County Commissioner Wesley Peterson also told Berman and his son, who keep a shooting range in their basement, to turn over all of their guns within 24 hours... [Full article here]

GILBERT POLICE MUM ON BERMAN'S GUN COLLECTION
East Valley Tribune
Nick R. Martin, Dennis Welch, Tribune
July 31, 2008
[Excerpts] The Gilbert Police Department is keeping information about Mayor Steve Berman’s extensive weapons cache a secret, after a court commissioner’s decision that the mayor is too volatile to possess any weapons. Berman was forced to turn over his gun collection to the police last week after a court commissioner decided he “poses a credible threat of bodily injury” to his estranged wife, Michelle, who recently accused him of years of physical abuse... On Thursday, the police department refused to release information showing what kinds of weapons Berman gave up. In fact, in responding to a public records request from the Tribune, the agency instead released page after page of heavily redacted documents, hiding the descriptions, makes, models and values of the mayor's weapons. Based on a count of blacked-out lines in the document, the mayor turned over at least 26... [Full article here]
on 8/01/2008