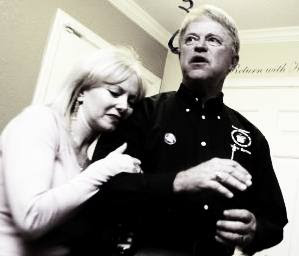 ..."I don't know what to say, other than I just wanted a gentle, quiet divorce," Michelle Berman said...

Estranged wife still contacting Gilbert mayor
East Valley Tribune
Nick R. Martin
August 8, 2008
[Excerpts] They are separated and headed for a divorce, but it appears Gilbert Mayor Steve Berman and his wife haven't had enough of each other. Berman's wife sues for divorce... Michelle Berman said on Friday her estranged husband called her July 25 in direct defiance of a restraining order she obtained last month. She declined to say what the phone call was about but said she did not report it to the police. If she had, according to the restraining order, the mayor could have been arrested and charged with a crime. However, Michelle Berman also said she has called her husband and sent him numerous text messages since obtaining the court order. Her story backed up claims Steve Berman made in newly filed court records, saying Michelle left him as many as 15 voice mail messages since July 22, when a judge granted the restraining order. In one voice mail just this week, the document says Michelle Berman even called to ask him "to come assist her because she was in pain." If true, the voice mails and text messages appear to contradict the reason Michelle Berman said she got the restraining order in the first place: because she was severely afraid of her husband. In her original request in Maricopa County Superior Court, she told a court commissioner, "I fear for my safety and the safety of my family." On Friday, Michelle Berman said most of her messages urged her husband to "seek medical help" for psychological issues. "I might have left a few voice messages ... saying, you know, this never needed to happen," Michelle Berman said... [Full article here]

Mayor's wife files for divorce
The Arizona Republic
by Mike Walbert
Aug. 8, 2008 10:45 AM
[Excerpts] The estranged wife of Gilbert Mayor Steve Berman filed for divorce this week. Michelle Berman, 45, is seeking a divorce from Steve Berman, 60, after less than 10 months of marriage. The two married November 2007 after dating for six years. The filing comes about a month after a domestic violence investigation centering on the mayor was launched... Their breakup erupted into the public spotlight over the last month after it was confirmed that Steve Berman was being investigated by the Maricopa County Sheriff's Office in connection with an alleged domestic dispute incident in early July. "I don't know what to say, other than I just wanted a gentle, quiet divorce," Michelle Berman said late Thursday in an interview with The Republic... Michelle Berman alleged that Steve Berman threatened to kill her and physically injure her father. A Gilbert police counselor was made aware of the allegation on July 9. Gilbert police officials handed the matter to the Sheriff's Office to avoid a conflict of interest. Michelle Berman also claimed her estranged husband physically and verbally abused her during their relationship. Steve Berman has denied the accusations and, in turn, alleged that Michelle is lying and that she has a prescription painkiller abuse problem. Steve Berman was not arrested or charged in connection with the alleged July incident... An order of protection was granted in Superior Court on July 22, barring Steve Berman and his son Steve Berman Jr. from having any contact with Michelle Berman. As part of the order, Steve Berman was required to turn over all firearms he owns to the Gilbert Police Department. Steve Berman was married three times previously [Full article here]
on 8/09/2008