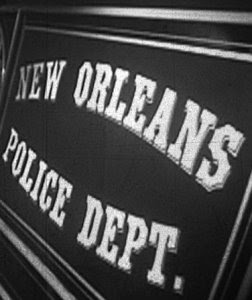 ...the charges stemmed from a party Peralta and the complainant were attending and the complainant reported the assault within 24 hours... Peralta still works for the NOPD. It's unclear whether he ever faced disciplinary action by the Police Department...

New Orleans officer charged with rape
WALB
Aug 8, 2008
A New Orleans police officer has been charged with rape by the Orleans Parish district attorney's office. Thirty-eight-year-old Carlos Peralta was charged with forcible rape in connection with an assault in March 2007. Peralta has worked for the New Orleans Police Department since 1996. This is the second time Peralta has been charged in connection with the incident. In December, the district attorney's office filed a bill of information charging Peralta with second-degree battery in the same assault, which Assistant District Attorney Robert White said was part of a plea deal that the woman had consented to. But last month, Peralta declined to plead guilty to the battery charge, prompting White to file the forcible rape charge, a far more serious charge that carries a sentence of up to 40 years. [Source]

N.O. officer to face sex count Plea offer rejected, prosecutor says
NOLA
Posted by Andrew Vanacore
avanacore@timespicayune
July 18, 2008
[Excerpts] Prosecutors plan to file a sexual assault charge against a New Orleans police officer next week after the officer declined a plea deal, said Robert White, chief of the New Orleans district attorney's public corruption unit. The officer, Carlos Peralta, reneged during a July 11 Criminal District Court hearing on an agreement to plead guilty to a lesser crime, second-degree battery, White said Friday. Prosecutors will refile charges as soon as next week, with possible allegations including sexual battery, rape or forcible rape, a crime that carries up to 40 years in prison... Though neither the New Orleans Police Department nor the district attorney made the allegations public until Friday, they date to March 2007... White said the charges stemmed from a party Peralta and the complainant were attending and the complainant reported the assault within 24 hours. NOPD public information officers did not respond to multiple requests for comment on the case Friday. The agency also did not respond to a request for the police report on the incident. White confirmed Peralta still works for the NOPD. It's unclear whether he ever faced disciplinary action by the Police Department. Peralta was charged and then arraigned this year, records show. But he never faced an indictment or arrest because the district attorney's office was satisfied that Peralta would plead guilty, White said... Peralta, 38, was charged with second-degree battery in December, a crime that carries a prison sentence of up to five years. In addition to longer prison sentences, the more serious charges Peralta could now face would require him to register as a sex offender if convicted... In Peralta's case, the complainant was satisfied with the proposed plea deal for a charge of second-degree battery, according to White and the Metropolitan Crime Commission, an independent watchdog group that has been monitoring the case for the past month... [Full article here]
on 8/09/2008