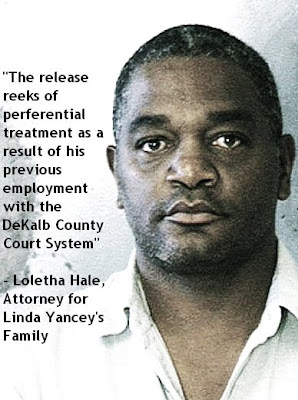 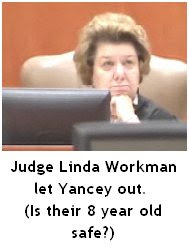 The ruling drew a response from a representative for two siblings of Yancey’s wife, whom Yancey is accused of killing. An attorney who said she spoke on behalf of the siblings of Linda Yancey said the DeKalb district attorney’s office failed to do enough to prevent Yancey’s release.

“It appears Mr. Yancey is receiving preferential treatment as a result of his previous employment with the DeKalb County court system,” said a statement issued by lawyer Loletha Denise Hale, who said she spoke for Eugene Thomas and Gloria Thomas Sanders.

Asked about the statement, chief assistant district attorney Don Geary said Yancey “will be treated as any other criminal defendant charged in DeKalb County. We will vigorously prosecute within the limits of the law, and we will do everything we can to be mindful and considerate of the wishes of the victims’ family.”

Linda Yancey, 44, and day laborer Marcial Cax Puluc, about 20, were killed at the Yanceys’ home near Stone Mountain June 9.

Derrick Yancey, 49, escorted prisoners to appearances in the county courthouse for 11 years until he was placed on leave because of the shootings. He resigned Aug. 11 and was jailed Aug. 14, when a grand jury indicted him.

Workman’s order quoted a Georgia law which makes defendants eligible for release on bond if they pose “no significant risk” of fleeing, intimidating witnesses or committing other crimes. Unlike many other states, Workman wrote, Georgia does not further restrict bond for murder defendants unless they have been convicted of a prior violent crime.

Geary opposed bond in a Wednesday hearing, telling Workman that Yancey became more of a risk to flee after quitting his job and placing his 8-year-old son with his mother. Workman’s order noted, however, that Yancey had taken those steps before his indictment and still reported to jail voluntarily when an arrest warrant was issued.

Geary did not offer evidence about the shootings or suggest that Yancey might be a threat to others.

Defense attorney Keith Adams said Thursday he expected it would take “a couple of days” to arrange the bond and electronic monitoring. Yancey is being held in an undisclosed jail.

Workman’s order said she expects Yancey to be tried by the end of the year.
[LINK]