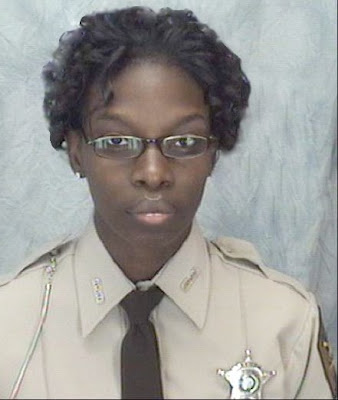 From below:
...[Tarica] Pulliam, a New Hanover County jailer and the mother of a 7-year-old girl, couldn't rely on the legal system she was part of to keep her family safe... How ironic that she was safer at work, than she was outside of her home... On Wednesday, he killed her. On Thursday, he killed himself. ...


SUSPECT SOUGHT IN DETENTION OFFICER'S SHOOTING DEATH
Star News Online
By Sherry Jones
August 6, 2008
[Excerpts] The New Hanover County Sheriff’s Office has identified Anthony Antwand Bowen, 30, as a suspect in the shooting death of a detention officer Wednesday morning at Briarcliff Villas apartment complex. Tarica Ann Pulliam, 27, was shot multiple times at 2405 Briarcliff Drive and died at New Hanover Regional Medical Center, according to the sheriff’s office. Bowen is considered armed and dangerous, according to a news release. He was last seen driving a silver 2004 Ford Taurus, NC VYE-3086. Investigators are asking anyone with information on Bowen’s whereabouts to call 798-4260... Bowen is Pulliam’s ex-boyfriend and a domestic violence protective order was in effect at the time of the shooting. Pulliam had worked for the sheriff’s office for two years [Full article here]

SEARCH CONTINUES FOR SUSPECT IN JAILER'S DEATH
Star News Online
By Veronica Gonzalez
veronica.gonzalez@starnewsonline.com
August 6, 2008 at 7:19 p.m.
[Excerpts] The ex-boyfriend of New Hanover County jailer Tarica Pulliam was out on $103,500 bond after he was charged with gripping her neck till she saw flashing lights, punching her in the jaw and holding her against her will on April 1. On Wednesday, Anthony Antwand Bowen was charged with first-degree murder after Pulliam was shot multiple times outside her apartment in the northern part of the county at 5:15 a.m... Bowen’s whereabouts as of press time Wednesday night remained unknown. Bowen was last seen driving a silver, 2004 Ford Taurus, NC VYE-3086. Law enforcement considers him armed and dangerous. "We’re dedicating any resources we have," said New Hanover County Sheriff’s Office Chief Deputy Ed McMahon, adding city police, the U.S. Marshals Service and the FBI were all searching for the 30-year-old. "Everybody is ready. It’s a priority for us"... A woman who lives in the neighboring subdivision, Page Gebsen, said she woke up when she heard a woman’s voice. Gebsen’s bedroom faces the apartment complex. "It was pleading"... At her mother’s white house off 16th and Orange, Gracie Pulliam grieved for her daughter. The living room and a dining area were dark even though it was still morning. "She was my baby," Pulliam’s mother repeated, too distraught for words. Tarica Pulliam had worked as a detention officer at the New Hanover County jail for two years... [Full article here]

[Excerpts] On April 2, 2008 twenty-seven year old Tarica Pulliam filed a protective order against her ex-boyfriend Anthony Bowen. The documents tell a story of abuse that occurred the night before. Pulliam says Bowen accused her of cheating, then grabbed her, threw her on the floor, and began to strangle her. She adds that he then loosened his grip to go get his gun. According to the statement the abuse stopped once Pulliam's mother arrived at the home. 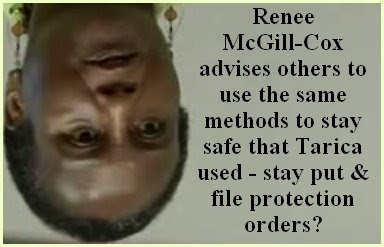 Renee McGill-Cox is the director of the Domestic Violence Shelter. She says Pulliam handled the situation appropriately by getting a restraining order. "She did do the right thing, she could have moved, but we have to remember that if this person was out to get her no matter where she went he could have tracked her down"...
McGill-Cox says Pulliam's case shouldn't deter other abused women from seeking protection. "Now there's something on paper that this is what you've done, and I'm not the only one that knows it any longer--law enforcement knows this."
PULLIAM'S RELATIVES RELEASED THIS STATEMENT:
"The family would like to thank everyone for their prayers and support in this untimely and unfortunate incident. We ask for privacy while we grieve and also ask that you keep her only daughter in prayer as she copes with the death of her mother."
She leaves behind a 7 year-old daughter, not fathered by Bowen.
Her daughter is now staying with relatives. If you know anyone that's a victim of domestic violence, call the domestic shelter at 343-0703... [Full article here]

COMMUNITY SHOCKED BY TARICA PULLIAM MURDER
WEEK OF AUGUST 7-AUGUST 14, 2008
The Wilmington Journal
By Cash Michaels
8/7/2008
[Excerpts] At press time Thursday morning, as state and federal law enforcement agencies across the region stay on the lookout for the man New Hanover County authorities say violently took her life, the community mourns the brutal murder of Officer Tarica Ann Pulliam... Tarica was the daughter of Larry and Gracie Pulliam, and the granddaughter of Mr. and Mrs. Dean Smith... If found alive, Bowen, 30, will be arraigned on first-degree murder charges... Published reports say Bowen had a criminal history involving first-degree kidnapping, first-degree rape and misdemeanor assault on a female... Davis Funeral Home and Jordan Memorial Chapel were handling the funeral arrangements, which were incomplete at press time. [Full article here] 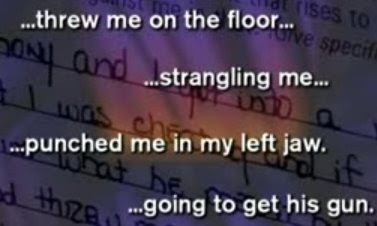 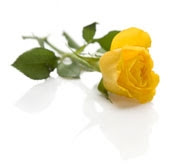 [Excerpts] To hear the people who knew her best tell it, Tarica Pulliam loved one thing in life more than anything else - to provide for her seven-year-old daughter, whom she loved with all of her heart... Our community, city, county and state are now mourning the loss of Tarica Pulliam, who, beyond being a devoted mother, was a New Hanover County Sheriff’s Dept. detention officer in good standing... How ironic that she was safer at work, than she was outside of her home, where authorities allege Bowen ambushed her and shot her repeatedly as she was about to report to work... As more comes to light about Bowen’s alleged physical, mental and emotional abuse of Tarica Pulliam, we are all forced to ask the question, "Wasn’t there something more the law could have done to protect one of its own?"... We are also left asking what can be done to make sure that such a deadly episode does not repeat itself... On behalf of the staff, management and owners of the Wilmington Journal, we sincerely send our condolences to the family of Officer Tarica Pulliam, and the fine officers she served with at the New Hanover County Sheriff’s Dept. Hers was a promising life we shall never forget. [Full article here] 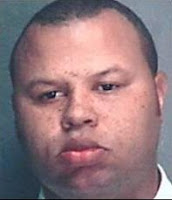 AS DEPUTIES APPROACH, SUSPECT SHOOTS HIMSELF
Star News Online
By Veronica Gonzalez
veronica.gonzalez@starnewsonline.com
August 7, 2008
[Excerpts] The 30-year-old man wanted for killing a New Hanover County jailer had hinted at suicide, those who knew him said Thursday. Anthony Antwand Bowen shot himself in the head in a wooded area off Blue Creek Road in Onslow County after two deputies started walking toward him and ordered him to put his hands up. "I’m over here," said Bowen... As the deputies approached, Bowen shot himself at 4:35 p.m... "The entire thing is a tragedy for all families involved," [Hanover County Sheriff Sid] Causey said. "Officer Pulliam was a valued member of this organization. I’m sure the suspect’s family is suffering also"... Those who knew Bowen had feared the worst, and even Pulliam herself indicated it was a possibility in an affidavit she filled for a domestic violence protection order. In it, she stated that Bowen "said that if I left him or he went to jail, he had nothing left to live for"... George Dandridge, Bowen’s friend of three years and his former co-worker at a trucking company, said Thursday before Bowen killed himself that they had talked about charges against Bowen. It was after Pulliam reported that Bowen choked her nearly unconscious, punched her in the jaw and held her against her will on April 1... [Anthony Bowen's mother] Katherine Bowen said her son wanted to move to Charlotte to be closer to his 8-year-old daughter. He would visit her every chance he had... Bowen wanted to move, but wasn’t sure he could get a job because of the charges against him... "He mentioned to me one time, ‘I’m gonna kill her,’ but it was all talk, I believe," Dandridge said... "I saw all the warning signs now that I didn’t see last week and the week before last," he said... "I never put two and two together," he said, adding that the Bowen he heard about in the media was not the friend he knew. "I never knew he’d go to this extent... I can’t believe he did it, to himself or the young lady..." [Full article here]

EDITORIAL: PIECE OF PAPER ISN'T MUCH PROTECTION
Star News Online
August 7, 2008 at 7:45 p.m.
[Excerpts] A judge ordered Tarica Pulliam's former boyfriend to stay away from her - he'd choked and threatened her during an argument four months ago, according to court papers. On Wednesday, he killed her. On Thursday, he killed himself. And Pulliam's name was added to the long list of women murdered by ex-partners who'd been warned to keep their distance... Pulliam, a New Hanover County jailer and the mother of a 7-year-old girl, couldn't rely on the legal system she was part of to keep her family safe. Protective orders are notoriously ineffective in deterring a violence-prone individual from harassing, harming or, in too many cases, killing the onetime object of their affection... For the most part, a woman (and sometimes a man) must hope that the ex is willing to comply. That didn't happen in the case of Gail Tice... Or Christen Naujoks... Or Gladys Bryant... Or Kathleen Seyford... Each of these victims, and countless others, turned to the courts for help. In each case, it wasn't enough to prevent their violent deaths. Our justice system rightly assumes that a person is innocent unless the state can prove his guilt. But Pulliam's ex-boyfriend, Anthony Antwand Bowen, had a prior record of violence. He had managed to plead down a kidnapping and rape charge to misdemeanor assault on a female in 2002. He was put on unsupervised probation. That's the equivalent of the honor system - we trust you to stay out of trouble. We need a better way to enforce protective orders. Here's one: Pitt County began requiring satellite tracking devices for men ordered to stay away from an ex-partner. If they got too close for comfort, they could be arrested... [Full article here]

[Excerpts] Wednesday morning a New Hanover County Sheriff's Office detention officer was shot and killed by a man whom she had a protective order against. This case points out that paperwork can only do so much. Though it didn't work for Tarica Pulliam, experts say women who fear for their safety should still get protective orders... According to district attorney Joy Alford, "75% of homicides occur after the 50-B order or the criminal charge has been taken out. That's when she's at her most vulnerable." Alford says cases like Pulliam's lead people to think protective orders aren't worth the paper they are printed on. Experts say they work 80% of the time. Rachel is a court advocate with domestic violence. She asked not to disclose her last name for her safety. She says victims have to judge for themselves whether an order will be effective or set off an explosion. "The victim knows their abuser best and they know if it's gonna escalate the situation, [but]sometimes it's just unpredictable"... The funeral for Tarica Pulliam will be at noon on Monday, August 11 at Union Missionary Baptist Church in Wilmington. [Full article here]
on 8/08/2008