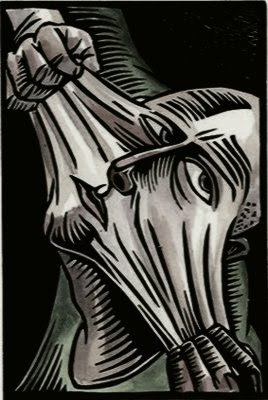 ...Those women are in more danger because the police will usually protect their own”...

Experts say victims often recant out of fear, love
Times-Standard, CA
Donna Tam/The Times-Standard
08/14/2008
As the trial of former Blue Lake Police Chief David Gundersen continues, the spotlight is aimed at his wife who seems to be giving contradictory testimony in the spousal rape case... While not commenting directly on Gundersen's case, experts say it's not uncommon for victims to change their mind on pressing charges, or reinterpreting what they've said. ”People have very mixed emotions... Some people are ready to go forward on day one, but then not ready to go a day later,” said Nancy Lemon, a lecturer at the University of California Berkeley School of Law and a domestic violence expert witness... They may have hope that the person they love will change, outside pressures from family or clergy who don't believe in divorce, financial dependence, or they want to keep a father figure for their children... But the No. 1 reason, Lemon said, is the fear of retaliation... “The fear is a really really big deal. Victims are aware that the criminal justice system can't protect them”... Lemon said the situation can be perpetuated if the abuser is in law enforcement. ”Those women are in more danger because the police will usually protect their own,” she said. Often victims will need some sort of outside support to get them through the process, Lemon said... [Full article here
on 8/14/2008