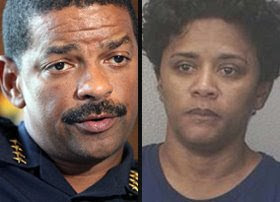 ...Despite criticism from outsiders, the majority of Fort Lauderdale city commissioners have defended [Chief Frank] Adderley and described it as a private matter...

Chief called fellow cop, not 911 line
When his wife opened fire on Fort Lauderdale Police Chief Frank Adderley, the chief didn't call 911 to report the incident. Instead, he called a fellow police administrator.
Miami Herald
By AMY SHERMAN asherman@MiamiHerald.com
AND ADAM H. BEASLEY
Posted on Mon, Aug. 04, 2008
When Eleanor Adderley fired four shots at her police chief husband in their Plantation home, he didn't call 911 -- even though he had been in Fort Lauderdale law enforcement for almost three decades. Instead Frank Adderly telephoned another top police administrator -- Plantation Deputy Police Chief W. Howard Harrison... When asked if the situation was out of the ordinary, Harrison responded: "Aside from the obvious? No. I get phone calls all the time." Frank Adderley did not receive preferential treatment, Harrison said Friday when reached by telephone. Eleanor Adderley quickly bonded out of jail and was charged with felony aggravated assault -- not attempted murder. She told authorities that she didn't intend to hit her husband -- only to scare him. Formal charges are expected to be filed within the next week... Despite criticism from outsiders, the majority of Fort Lauderdale city commissioners have defended Adderley and described it as a private matter... "Maybe he didn't want the media to find out he and his wife were running into apparently serious domestic issues," said Ken Harms, former city of Miami police chief who testifies on police matters. "Why did he call another deputy chief of another department rather than 911?"... Adderley reached out to Harrison and the deputy chief asked Lt. Ken Kilbride to go to the Courtyard Marriott, where they believed Eleanor Adderley was staying. She was not there. About a half-hour later, Eleanor Adderley returned home and went on a shooting spree that ended when a neighbor convinced her to give up the gun. Meanwhile, Harrison had become concerned when he could not reach Frank Adderley by phone. Minutes after the shooting, Harrison and Kilbride arrived at the family's Plantation residence. Adderley, who had gone to a nearby park, called Harrison a short time later -- apparently the only report of the shooting made to Plantation police.
[Full article here]
on 8/04/2008