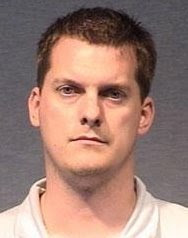 ...His records indicate a pattern of questionable off-duty behavior that started not long after his hiring... he told Garland Police Lt. Cesar VanCleave that he thought he would be indicted and then fired, but that he would beat the rap and then get his job back...

DALLAS POLICE OFFICER WITH TROUBLED HISTORY
Dallas Morning News, TX
Crime Blog
Aug 20, 2008
[Excerpts] Sometimes I'm surprised when cops get in trouble. Other times I'm not. After reviewing the internal affairs records of Senior Cpl. Daniel Hageman, a Dallas police officer accused of shooting at a woman's vehicle in Garland, I'm not surprised. His records indicate a pattern of questionable off-duty behavior that started not long after his hiring in 2001. In 2003, then-Apprentice Police Officer Hageman got a written reprimand after he used his in-car computer to check the background of a woman he was thinking about dating. The woman told police that she was frightened because he tracked her down and showed up unannounced at the home of her parents. "Officer Hageman used poor judgment throughout this incident. He is a young officer and hopefully the lessons learned as a result of this will serve him well," Sgt. J.L. Hein wrote at the time. In 2004, a DART bus driver complained to investigators that several cars appeared to be racing and that the driver of a white Corvette cut in front of him and then began following him. "I thought this guy was some kind of maniac"... That same year, a former girlfriend told police that he showed up at her workplace and harassed her after she had told him to leave her alone and being instructed not to contact her by a supervisor. In the Garland case, Cpl. Hageman has denied shooting at the vehicle. According to Garland police records, he told Garland Police Lt. Cesar VanCleave that he thought he would be indicted and then fired, but that he would beat the rap and then get his job back. "Hageman added that he would then be labeled as one of 'those guys' that gets fired and then gets their job back"... Officer Joe Harn, a Garland police spokesman, said the third-degree felony deadly conduct charge against Cpl. Hageman has been dismissed, but that police are having some evidence sent off for testing and they expect to refile the charge... [Full article here]

DALLAS OFFICER CHARGED WITH ROAD RAGE SHOOTING
myfoxdfw.com
10 Jul 2008
[Excerpts] Garland police on Wednesday arrested a Dallas police officer for allegedly shooting at a vehicle during a road rage incident. According to Dallas police, Sr. Cpl. Daniel Hageman turned himself in to Garland police at about 6 p.m. on Wednesday... They said Hageman was off duty when he opened fire at a vehicle, hitting its right rear tire. A woman and passenger who were in the vehicle said a man drove up behind them, started yelling and then fired several shots... The victims were later able to identify Hageman in a photo lineup... He has been placed on administrative leave pending an investigation by the Internal Affairs Division. He is out of jail on a $5,000 bond. [Full article here]
on 8/21/2008