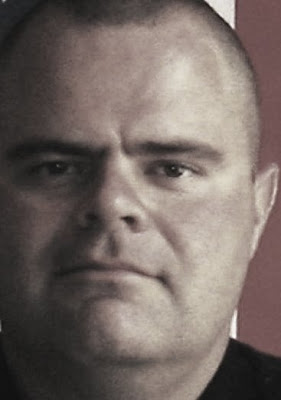 Leaders lead. I'd guess that Muskingum County Sheriff Bob Stephenson took no delight in firing Deputy Lantz, yet the badges of his whole department shine brighter because of his quick, strong decision.

..."After the investigation and the facts presented, I thought it was appropriate that I terminate him," [Sheriff Bob] Stephenson said. The female, a former sheriff's office employee and a Muskingum County resident, reported the incident... "As a result, he was immediately placed on administrative leave and will be terminated, effective today," [Col. Bryan] Hoover said... "He went to her apartment, for a lack of a better term, a social visit"... "Like any other situation involving a deputy, the other deputies don't want to work with somebody who has problems or has issues. I think they're happy it's been addressed so quickly and taken care of," Hoover said. "Law enforcement officers are held to a higher standard of conduct. But we are human and make mistakes, it's just that the sheriff's office doesn't condone that kind of conduct one bit"...

LOCAL SHERIFF DEPUTY FIRED
whiznews.com
By: Jennifer Steck
Thu, Aug 14, 2008
A sheriff's deputy is terminated after an investigation into allegations of inappropriate conduct with a female are true. Former Deputy Tad Lantz was terminated this morning by Muskingum County Sheriff Bob Stephenson after the conclusion of the investigation of the allegations that occurred back on July 12th. "Deputy Lantz went to her apartment, for lack of a better term to pay her a social visit. He went again on duty, deputy Lantz disabled his gps tracking on his cruiser. GPS tracking unit are operated though our in car computer system, was talking to her in her apartment, and touched her in a inappropriate manner. " The victim who's name has not been released, was a former employee of the Sheriff's Department as well as an acquaintance of Lantz. After the incident the woman immediately contacted another officer and the investigation started. "Once we received the allegation we immediately contacted the Buckeye States Sheriff Association and asked for an independent investigation into the allegations. As a result of the investigation, Deputy Lantz was put on administrative leave, as a result of the investigation, Deputy Lantz was terminated by Sheriff Stephenson." A pre-disciplinary hearing was to be held this morning so Lantz could give his side of the story, he waived that hearing instead admitting to the allegations, leading to the his termination. It is not known at this time if the woman who made the allegations will file criminal charges against Lantz. [Full article here]

DEPUTY TERMINATED FOR INAPPROPRIATE CONDUCT
Zanesville Times Recorder, OH
By LEEANN MOORE leemoore@nncogannett.com
August 15, 2008
...The incident, which occurred July 12, was investigated by the Washington County Sheriff's Office after the Muskingum County Sheriff's Office requested the Buckeye State Sheriff's Association (BSSA) refer an agency to conduct the investigation. "After the investigation and the facts presented, I thought it was appropriate that I terminate him," [Sheriff Bob] Stephenson said... [Col. Bryan] Hoover said Lantz admitted to touching the female inappropriately, but in a written statement said it was an accident. He said the female was an acquaintance of Lantz. "He went to her apartment, for a lack of a better term, a social visit... He was talking to her and touching her in an inappropriate manner... The young lady made the allegations and he admitted the conduct... Obviously the sheriff felt there was sufficient evidence to substantiate the allegations and took the appropriate actions... Lantz worked road patrol and at the jail. Hoover said he's worked at the sheriff's office in the past, but was most recently hired again back in 2001. "Like any other situation involving a deputy, the other deputies don't want to work with

somebody who has problems or has issues. I think they're happy it's been addressed so quickly and taken care of," Hoover said. "Law enforcement officers are held to a higher standard of conduct. But we are human and make mistakes, it's just that the sheriff's office doesn't condone that kind of conduct one bit." Lantz was served his termination papers Thursday and it is unknown at this time whether or not criminal charges will be filed by the female. Lantz was also a lieutenant with the Newton Township Volunteer Fire Department until he was recently demoted to firefighter, according to Chief Allen Deaver. "He is with the department. He was a lieutenant with the fire department and he is now a firefighter with the department and it has nothing to do with this incident. We decided to change some of the officers around," Deaver said. [Full article here]

FIRED DEPUTY HAD MORE PRAISES THAN REPRIMANDS
Zanesville Times Recorder, OH
By Kathy Thompson kthompson@nncogannett.com
August 19, 2008
[Excerpts] ZANESVILLE - A former Muskingum County deputy had more acclamations in his personnel file than reprimands. Tad Lantz, 35, a deputy for the past seven years, was terminated after a month-long investigation by the Washington County Sheriff's Office revealed he had turned off his GPS until in his patrol car, entered a female's home and touched her inappropriately. Lantz was terminated from the department Thursday and now has an opportunity to file a grievance within seven days from the date of his released from the sheriff's office, according to Col. Bryan Hoover... Lantz was terminated for violating a number of department policies, according to the pre-disciplinary hearing report, including engaging in activity offensive to the sheriff's office, allegations of sexual misconduct which rise to the level of sexual imposition, disrespect, using his official position to coerce, intimidate or harass another person and lack of judgment by turning off his GPS unit in his cruiser and failing to notify communications that he was out of his vehicle the day of the incident... The inappropriate conduct is not tolerable and Hoover said turning off a GPS unit is against department policy. The only other two times Lantz was reprimanded was in August 2006 when he reported he was sick but was seen operating a bulldozer. Lantz was ordered to forfeit eight hours of vacation time or comp time for that infraction. Then in March of this year, Lantz was given a written reprimand for driving too fast... Lantz does have a number of acclamations in his file. In April of this year a woman wrote the office to thank Lantz for helping her son during an accident... In May 2007, Capt. Mark Ross wrote that Lantz had answered a call of a distraught man attempting to jump off the Duncan Falls-Philo bridge... In February 2006, Lantz was involved in the apprehension of a suspect after a shooting... In October 2005, Lantz received the Robert Tanner Award from Response for his ability to go "above and beyond his duty to help victims of domestic violence." In 2004 Lantz received an acclimation for helping catch a parole violator... Hoover said the sheriff's office operates on a progressive discipline system, meaning that if a disciplinary matter arises an employee will receive a written reprimand as a first and second warning, suspension as a third and, finally, termination if necessary. "If the sheriff deems the conduct to be serious enough, he can basically bypass the basic discipline steps and go straight to suspension or termination," Hoover said. Lantz had worked as a dispatcher and in the jail before he became a road deputy. [Full article here]
on 8/19/2008