[CA] Hard for Sgt. Rodrigues to get a fair trial (with so many victims) 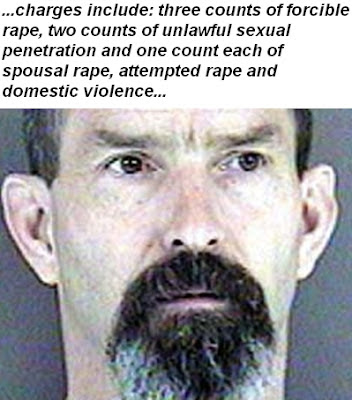 Attorney asks judge to recuse himself from case of accused sheriff's deputy
Hollister Free Lance, CA
By Michael Van Cassell
Jan 18, 2008
An attorney has asked the county's presiding criminal judge to dismiss himself from the case of a former sheriff's deputy indicted on eight felony charges, according to court documents. Mike Rodrigues, 47, of Hollister, was indicted in December on the charges - seven of which are suspected sex crimes. Those charges include: three counts of forcible rape, two counts of unlawful sexual penetration and one count each of spousal rape, attempted rape and domestic violence. Rodrigues' attorney, Christopher R. Miller, filed a request this week that San Benito County Superior Court Judge Steven R. Sanders recuse himself from the case. "The Honorable Steven R. Sanders is prejudiced against Mr. Rodrigues, or interests of Mr. Rodrigues, such that Mr. Rodrigues cannot have a fair and impartial hearing on any matter in this case before such judge," the request said... On Tuesday, Rodrigues will be arraigned and is expected to enter a plea to the suspected crimes. A judge and attorneys are also expected to discuss release of the transcript from a criminal grand jury that indicted Rodrigues...
[Full article here]