Laura:
"I've been married to Corey for 23 years. He's aggressive, controlling, extremely jealous. He has rage. He has been abusive... Corey has said many, many times to me that nobody will ever have me except him"...

I am not smart enough to know whether a list of items that is circulating - related to Lorain Police Detective Corey Earl - is ALL true or just NEARLY all true. Many of the listed items have separately made their way to the news media, but someone has taken the effort to bring the incidents together and add some info that I'm not aware of. When I came across this list - that appears hazily to be typed on Lorain Police letterhead - I didn't put it here on the blog because I don't understand it's source (pet peeve of mine), but Bad Cop News has obtained the same list, posted the image we received, and even provided converted text for it. 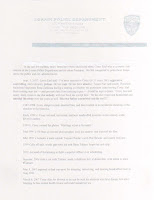 
Because "Detective" (should be "convict," "resident patient," or at least "FORMER officer") Corey Earl is likely to kill himself or others - at least no one could feign surprise, it's important that Lorain Ohio - from top to bottom - UNDERSTANDS that SHOULD Mr. Earl ever follow-through and take it to the next level (cause death) that they have a lot of explaining and paying to do regarding their complicity. Playing dumb isn't going to absolve them. The media has been responsible in making many incidents known. By repeatedly protecting him from the consequences of his actions, Lorain makes their whole police department look corrupt and frightening, gives the impression that their city leaders must fear information that Mr. Earl has threatened to reveal about their fine city, leaves his wife (and the kids?) at lethal risk,

and most ironic -
they actually PREVENT Mr. Earl from getting the help he really needs.

The timing and lengths of his mental health "help" so far certainly appear to have been tricks and games to help him keep his job & avoid jail. Psychiatric patient impersonations.

Police Chief Cel Rivera:
“HE HAS BEEN ONE OF OUR MOST SUCCESSFUL COPS, SO WE’RE ANXIOUS TO GET HIM BACK.”
(WHAT?)

I am in a city that was hit with several lawsuits at once - including ONE for $75M after the "wrongful death" of our police chief David Brame's wife Crystal. Like Lorain, Tacoma KNEW their cop was not right, yet jogged along side his deteriorating mental state moving obstacles out of his way as he zigzagged to the grand finale - a very messy, bloody murder-suicide in a public parking lot with their children running to them, screaming.

Can't Tacoma have already paid the price for the lesson?
MUST it be repeated?
Who in their right mind would take this kind of chance after the lesson has been paid for in full with blood and heartbreak? With loss of life, parentless children, national shame, and did I mention

(Sometimes cities appear to not care who dies - or what children who witness it will have to remember all their lives - but cities do still understand the language of liability. Sad, but true.)

My city THOUGHT it was helping the chief keep his job, buying him some time to collect himself and get back to who they wanted him to be. Like Mr. Earl & Laura, the risk of death to our chief and his wife Crystal was clear. My city would love to have the opportunity to turn back the hands of time. Lorain still has choices. Lorain Ohio really (really) needs to stop seeing the reports of Laura AND HIS OTHER REPORTED INCIDENTS as the problem, protect her & the kids, and get Earl some REAL help - including retraining into a new line of work when he's stable.

There are no guarantees - but Lorain could at least genuinely TRY to do the right thing.

From Chronicle-Telegram article "Wife: Cop was abusive":
Laura Earl said she thought her husband was going to kill her and then kill himself... "I don't think I've ever seen his eyes like that, wild," she said... THE AUG. 20 INCIDENT WAS THE THIRD TIME LAURA EARL CALLED AMHERST POLICE ON HER HUSBAND. On July 6, she complained that he had thrown items and threatened to hit her. A few days later, she said Wednesday, Corey Earl ransacked her home, dumping out her possessions, taking his television and snapping a crucifix on her wall in half. She also told the magistrate that Corey Earl threatened to "smash her face" and kill her...

(Snapping the crucifix in half,
together with the threats to kill?)
The City of Lorain, it's courts, and it's police department have recently rolled over and accepted Laura's complete recant, letting her go on record (unprosecuted?) now as an admitted liar. The easy way out for everyone? Only if wishes always come true. In the real world Mr. Earl's momentum is only mounting. Mr. Earl's twisted idea that he can do anything and still be a cop continues to be fed and reaffirmed by those whose job it is to be sure it isn't so. Lorain, as an integrated system, is creating a Godzilla. With no audible dissent Lorain continues to give incredible power (and the appearance of public TRUST) to someone

who it is actually destroying.

Not only might our chief's wife be alive today had Tacoma intervened when it could,
but maybe also David Brame.

If Corey Earl fatally hurts even only himself - he can count on me to rant in his behalf. I will be here & everywhere, not blaming, but blaring rants about Lorain accountability for creating monsters in their good ol' boys laboratory.

Corey Earl's attorney Jonathan Rosenbaum:
"The fact that she chooses to say she's afraid is not legally sufficient to justify the protection order."

Here I have spoken with care for the directly involved - frightened family and offending, troubled officer - but have not even touched on Lorain citizens. THIS is who can pull them over and change their lives, shoot them down, or testify against them in a court of law? Is Mr. Earl just a sample of what lurks within the uniforms & behind the Lorain badge? If the citizens of Lorain remain quiet this will be the police "protection" they have custom-ordered for themselves.