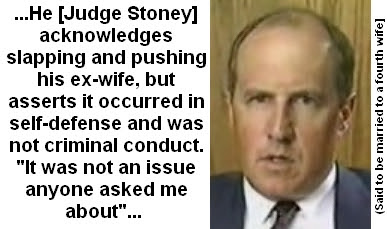 "...The police are predominantly male chauvinist pigs. They're just not sensitive to what's happening. I can say that because I used to be a police officer..."

...Today he is one of the highest paid judges in West Valley City UT. He hears domestic violence cases all of the time...

I just ran across this on Youtube - including the text with the video. Judge Stoney APPEARS to not only have gotten away with serial attacks, but has never been negatively impacted by it. Even when he had to stop being a judge for a stint when his repeated abuse became PUBLIC - he never stopped drawing his full pay. He is still a judge. I found a small blurb that confirms Stoney is still officially judging and sentencing others:

[TEXT ACCOMPANYING VIDEO ON YOUTUBE] "Judge accused of domestic violence uses connections to get away with it."Circuit Court Judge Keith Stoney was fired by the State of Utah when it surfaced that the police had been called to his home multiple times for Domestic Violence. Notice he says he NEVER beat his wives, in fact they beat HIM with brooms. It is outrageous and unbelievable. He was investigated in 1987 by DCFS for abusing his children and got away with that by using his contacts in law enforcement. He has taught at the police academy for decades. His wives and children called the police only to have them respond and greet with affection the very man who had violently laid his hands on them. In 2003 after his own son was arrested for assault and battery. His son had been in trouble many previous times in which Judge Stoney became involved. The Judge attempted to use his contacts to have his son released from any consequences. This time his son's arrest resulted in charges. He has done this multiple times. In 2004 he used his contacts to get a stepdaughter out of serious drug related trouble. In 1993 his own minor daughter called the police to say he was beating her and instead he had her charged as a runaway. Today he is one of the highest paid judges in West Valley City UT. He hears domestic violence cases all of the time. He is a high ranking and well respected Mormon as well. As if his position wasn't egregious enough, Judge Stoney is frequently hired to speak across the country as a "Domestic Violence Expert."
[End of youtube text] 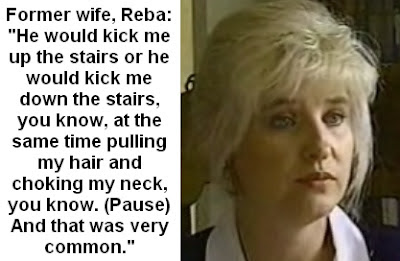 A FEW NOTES FROM THE ABOVE VIDEO:

Narrator: "He practiced what he prosecuted"

Ex-wife Reba Stoney says it was 17 years of domestic violence. "He would kick me up the stairs or he would kick me down the stairs, you know, at the same time pulling my hair and choking my neck, you know. (Pause) And that was very common."

Ex-wife Ginger Ainscough said she was beaten on a regular basis. "We had been married about five months the first time he got physically abusive. I was pregnant at the time."

Keith Stoney
"I've been hit, I've been beat, I've been chased, I've been kicked in the crotch. I've been smacked upside the head with brooms, chairs, uh, I've been accused of every kind of mayhem that one could find and it just didn't happen." 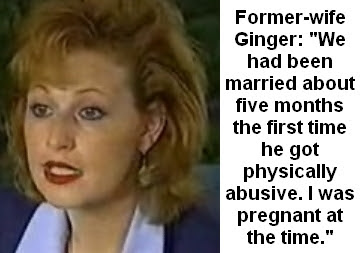 SNIPS FROM SOME ARTICLES OVER A DECADE AGO:

POLICE IN UTAH GRAPPLE WITH DOMESTIC VIOLENCE
Deseret News (Salt Lake City, UT) -
Julianne Basinger, Associated Press
February 11, 1993
[EXCERPT]...Circuit court clerks in Salt Lake City estimate officers cite perpetrators 90 percent of the time rather than taking them into custody... The officers, usually male, will often talk to the man rather than the woman. "They're over there talking man-talk and she's just getting more angry. The police are predominantly male chauvinist pigs. They're just not sensitive to what's happening. I can say that because I used to be a police officer," says West Valley City prosecutor Keith Stoney... 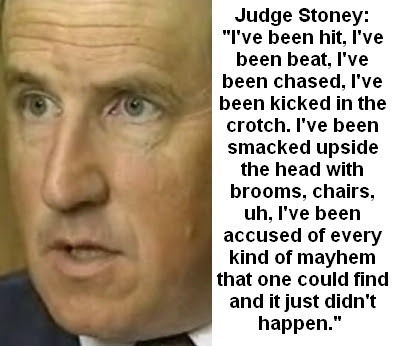 High Court Benches Utah Judge No One Checked His Past; Ex-Wife Says He Hit Her Allegations May Cost Judge His Job
Salt Lake Tribune (UT)
Sheila R. McCann
September 2, 1995
[EXCERPTS]The Utah Supreme Court suspended the authority of temporary 3rd Circuit Judge Keith Stoney on Friday after officials acknowledged they failed to do a background check and did not evaluate past allegations of domestic violence against him. Stoney, 42, a West Valley City prosecutor, had been on the downtown Salt Lake City bench for a week... Court officials concede they did not investigate or even know of allegations by his ex-wife, including a disorderly conduct charge filed by Sandy prosecutors in 1993 and a temporary-protection order issued in 1994. "Given the nature of the allegations and the caseload he would be hearing, it has raised the serious issue of the propriety of having him hear these cases," said Court of Appeals Judge Pam Greenwood, who is acting state-court administrator... "This appalls me," said Ginger Ainscough, the ex-wife who accused Stoney of slapping her and pushing her down stairs during their two-year marriage. "He should absolutely not be a judge"... HE ACKNOWLEDGES SLAPPING AND PUSHING HIS EX-WIFE, BUT ASSERTS IT OCCURRED IN SELF-DEFENSE AND WAS NOT CRIMINAL CONDUCT. "IT WAS NOT AN ISSUE ANYONE ASKED ME ABOUT"...

Retired Judge to Fill In On 3rd Circuit Bench
Salt Lake Tribune
Sheila R. McCann
September 6, 1995
[EXCERPTS] A retired judge has been hired to temporarily handle the case load of pro tem 3rd Circuit Judge Keith Stoney, who was suspended Friday by the Utah Supreme Court... Stoney has contacted 3rd Circuit Court officials since the suspension Friday but has not resigned, said Court of Appeals Judge Pam Greenwood, who is the state's acting court administrator. Retired 2nd Circuit Judge Mark Johnson will serve temporarily in the position. Other senior judges also will be called on to serve, if necessary. "Stoney 's status right now is unresolved," Greenwood said Tuesday. The courts do not plan to now investigate the domestic-violence allegations, and are instead hoping Stoney will resign... She said it is unclear how the courts will proceed if Stoney does not resign... Stoney was hired outside the usual nominating process for permanent state judges, which includes background checks and a public release of finalists' names... Stoney was the only candidate interviewed by 3rd Circuit Court officials. Greenwood said the scope of a search for his replacement will be wider and will include background checks of candidates.

He's Off the Bench, But on the Payroll Suspended Judge Still Drawing His $75,000 Salary
The Salt Lake Tribune
Sheila R. McCann
September 19, 1995
[EXCERPTS] Suspended judge Keith Stoney is continuing to receive full pay, based on a $75,000 annual salary, more than two weeks after the Utah Supreme Court revoked his authority. Stoney 's suspension on Sept. 1 was requested by 3rd Circuit Court officials, who acknowledged they hired the West Valley City prosecutor without a background check and had failed to evaluate allegations of domestic violence against him... he has not resigned or been dismissed. State court officials have no deadline for resolving Stoney 's status and will continue to pay him indefinitely, Court of Appeals Judge Pamela Greenwood said Monday. The Utah Supreme Court approved a rule change in August to allow Stoney's expedited hiring, skipping the usual screening and nomination process for state judges. He was the only candidate interviewed... Stoney , representing himself, fought [2nd wife Ginger Ainscough's] allegations in their divorce. He sought affidavits from friends and family, including his first wife, Reba Stoney. IN A STATEMENT FILED IN 3RD DISTRICT COURT, REBA STONEY SAID HE HAD NEVER BEATEN HER DURING THEIR 17-YEAR MARRIAGE... HOWEVER, REBA STONEY CLAIMS THE SIGNATURE ON THE STATEMENT IS NOT HER SIGNATURE. West Valley City officials have hired an independent handwriting expert to examine the document, and results are expected later this week... West Valley City officials are investigating an allegation of forgery related to Stoney's divorce from Ainscough...

W.V. PROSECUTOR RESIGNS AS PRO TEM JUDGE
Deseret News
Marianne Funk
September 21, 1995
[EXCERPTS] West Valley prosecutor Keith Stoney resigned as a pro tem judge Wednesday in the wake of media reports that he may have physically abused two ex-wives... Stoney will return to his job as a prosecutor for West Valley City. He will continue to vigorously prosecute domestic violence cases... He said he is in the middle of a custody battle with his first wife, Reba, over their youngest child. That conflict may have prompted her claim, he said. His second wife, Ginger, sought a protective order against Stoney in 1994, claiming Stoney threw her down the porch steps at his home and hit her on the side of the head... Asked if a judicial candidate's personal life ought to be looked into, he replied, "This may be cutting my own throat, but I'm not so sure that's not a bad idea"...