[OK] No charge for Sgt. Adam's pulling wife across floor by her hair 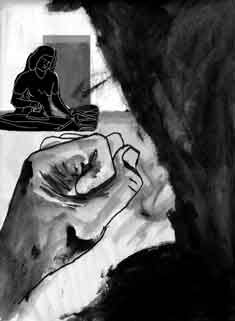 Purcell Police Chief Kevin Williams:
“This is a small department and we are all friends,”

...The teen’s right cheek was red and swollen... Adams’ wife stepped in between the teen and his stepfather. She was allegedly pushed and struck... this was the second domestic call they had received at the Adams home... [the wife said that he] had pulled her across the living room floor by the hair on her head... there was no charge filed... He serves as sergeant in the 20-officer department.

Police officer charged with two misdemeanors
Two counts of domestic abuse filed in Cleveland County
Purcell Register, OK
Susie Williams-Allen
January 10, 2008
Purcell, OK -- A Purcell Police officer faces criminal charges following an alleged domestic dispute with his family in Lexington early New Year’s Day. Two misdemeanor counts of domestic abuse were filed against David Adams January 2 in Cleveland County District Court... The stepson told police he wasn’t feeling well and had gone to bed. When he got to his bed room, he found confetti in his bed... The youth cleaned the confetti up with a Dust Buster and when he was walking through the living room he reportedly dropped the buster by accident... Adams reportedly got into an argument with the 16-year-old at this time and hit him in the face... The teen’s right cheek was red and swollen, according to the report. Adams’ wife stepped in between the teen and his stepfather. She was allegedly pushed and struck by Adams, the police report said. The wife denied to police that she was hit in the face, but her son said she was hit and that she had told Adams “Don’t you ever hit me again.” According to the report, Adams told a different story as to what occurred. He said the boy “bowed up” at him. The report said Adams admitted to the officer that he hit his stepson, because “he wasn’t going to have his kids bowing up to him”... Lexington Police Chief Deana Standridge said this was the second domestic call they had received at the Adams home. The other call was in January 2004. Standridge said when police arrived at the home on this occasion, they learned from the wife that she and her husband had been in an argument and he had pulled her across the living room floor by the hair on her head. No apparent marks were on the wife, but police filed their report with the Cleveland County District Attorney’s Office. Standridge said she didn’t know what occurred after that, but does know there was no charge filed. At the Purcell Police Department, Chief Kevin Williams and others were surprised by the news. When the chief learned of the situation early January 2, Adams was placed on paid leave until an internal investigation was completed. “This is a small department and we are all friends,” Williams said. “The allegations came as a surprise. “Domestic abuse is serious, and when it is one of us, it is really serious,” Williams said. Williams said Adams is an exemplary officer having been with the Purcell force for over nine years. He serves as sergeant in the 20-officer department...
[Full article here]