When parents kill parents - If everybody thinks you're horrible, I win 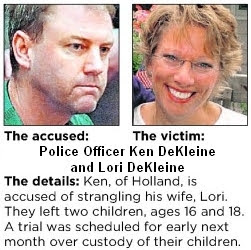 ..."Perpetrators are extremely narcissistic people," said Stehouwer, chairman of Calvin College's psychology department. "Nobody thinks about the kids. 'It's all about me. I'm all good, and you're all bad. If everybody thinks you're horrible, I win'"... These kids will experience their own form of post-traumatic stress syndrome for many years...

The aftermath after a parent kills a parent
The Grand Rapids Press
by John Agar and John Tunison
Sunday January 27, 2008
[Excerpts] ...With his wife out of the way, [Ken] DeKleine, a Holland police officer, allegedly told investigators he could have the children to himself... The DeKleine case is among about a dozen high-profile slayings in recent years in which parents allegedly killed an estranged or ex-partner - killings that left children the ultimate victims... These children face a possible lifetime of hurt, anger, distrust, even, in some cases, undeserved feelings of guilt as they grow up without those they relied upon the most. Few can identify with such loss and betrayal. The stigma is enormous in a period of life in which conformity is valued. "There are three things going on that make this just what I call a 'triple whammy' for the kids," psychologist R. Scott Stehouwer said. "No. 1, your mom dies. No. 2, she was murdered. No. 3, your dad did it. To the kids, it's an absolute numbing. It just sort of levels you." They are essentially orphaned, and the world they once knew ends in an instant. Police, protective services and extended family take over. "We try to get them with family as soon as possible," Allegan County sheriff's Detective Chris Koster said. "When you've got a murder-suicide, you got two sets of grandparents. How do you choose the best one? What (dynamics) of the family are going on? With young kids crying for somebody, that's the person we're generally trying to find." Children are not a consideration for parents who kill. Parents act out of intense hatred for the ex-spouse. "Perpetrators are extremely narcissistic people," said Stehouwer, chairman of Calvin College's psychology department. "Nobody thinks about the kids. 'It's all about me. I'm all good, and you're all bad. If everybody thinks you're horrible, I win.' If you really were concerned about the kids, this is the last thing you would do," Stehouwer said... For the children, it takes time just to comprehend what happened. They need a long time to heal, with support from the community, including church and school, to know they can have a normal life. It is important they not be stigmatized... Allegan County Sheriff Blaine Koops said these "true victims must carry this burden for their entire life. In fact, in many cases, because of unresolved psychological trauma, many of the children will pass the trauma on to their children -- thus making it intergenerational. So now, not only must we deal with the immediate emotional trauma, the long-term consequences are even more devastating. These kids will experience their own form of post-traumatic stress syndrome for many years." In some cases, family divisions -- the victim's family on one side, the suspect's on the other -- create problems for the kids. Others come together... Family has come together in the aftermath of the November murder-suicide by Brainard, the Plainwell police officer. He shot and killed his wife, Pam, then himself. Family friends said she planned to divorce him. Left behind were their 2-year-old daughter, Kayla, and her 15-year-old son, Kyle... It is difficult to understand how a police officer skilled in handling domestic violence failed to recognize the impact on the children. "He had to be trained on what the children go through," [Pam Brainard's sister, Jennifer] Drake said. "He should have thought of the children and looked at what he was doing to an innocent baby and a fine young man." Christopher DeKleine, 16, and his sister, Breanne DeKleine, 18, are the latest victims. Their father, the 13-year Holland police officer, allegedly hid in the attic until the kids left for school, then strangled their mother. The son found his mother. "When he closes his eyes, he's always going to see that. I still see my parents on the floor," said Susan Murphy-Milano, who became a nationally recognized advocate for battered women after her father, a Chicago police detective, killed her mother in January 1989, then killed himself...
on 1/28/2008