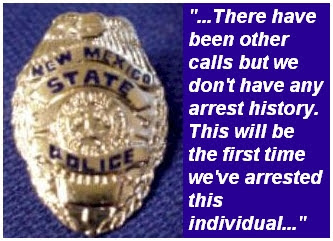 Officer Arrested For Alleged Domestic Violence
KOAT
January 16, 2008
RIO RANCHO, N.M. -- A New Mexico State Police officer was arrested Wednesday. Lt. Wesley Lacuesta was arrested in Rio Rancho after his estranged wife reported being physically abused. Lacuesta's wife told police that she and her husband got into a fight along Highway 528. According to police, she said that they were both in their personal vehicles when he pulled up behind her, got out and walked to her partially opened window. She told police that they started arguing when Lacuesta broke her window. Rio Rancho police told Action 7 News that this was not the first time they had heard from the couple. "There have been other calls but we don't have any arrest history. This will be the first time we've arrested this individual," said John Francis, who is with the Department of Public Safety... Lacuesta was already on unpaid leave for a separate personnel issue.
on 1/17/2008