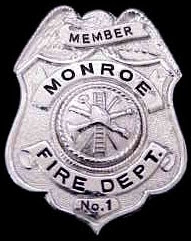 Monroe firefighter arrested, accused of forcing wife to eat dog feces
The Shreveport Times
By Stacy Temple stemple@thenewsstar.com
January 13, 2008
A Monroe fire captain has been booked into jail on charges that he attempted to force dog feces into his wife's mouth. Monroe police arrested Monroe fire Capt. John Randall "Randy" Jack, 40, and his 22-year-old wife, Brittany, both of Monroe, each on one count of domestic abuse battery. According to police reports, the couple got into an argument and Randy Jack began throwing some of his wife's belongings out of their home. Brittany Jack told officers her husband then forced her onto the bed and attempted to force dog feces in her mouth and later slapped her on the head. Brittany reportedly bit her husband on the leg during their argument. Police said they observed dog feces on Brittany Jack's face and on Randy Jack. Monroe Fire Chief Jimmie Bryant said he does not know all of the facts of the incident but will investigate it accordingly. "This is something we will follow up on and take appropriate action." The couple were booked into Ouachita Correctional Center. Randy Jack's bond was set at $4,000. His wife's bond was set at $1,000...
on 1/14/2008