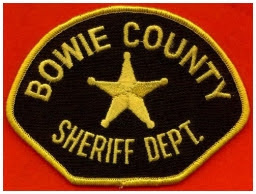 Rangers investigate complaint against Bowie County deputy
Texarkana Gazette
01/05/2008
A Bowie County deputy has been placed on administrative leave pending an investigation into a woman’s complaint, authorities said. The complaint involves Lt. Pat Savage, said Capt. David Grable. A report of the woman’s complaint was taken Dec. 29 at the Bowie County Sheriff’s Office. The matter was immediately turned over to the Texas Rangers, Grable said. Savage has been with the sheriff’s department for more than 20 years. He was placed on administrative leave this week after he returned from holiday, Grable said. The investigation into the unnamed woman’s complaint will be conducted by Texas Ranger Jay Womack, who was not available for comment Friday.
—Terri Richardson
on 1/06/2008