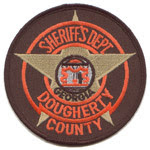 Deputy’s spouse jailed for violating court order
The husband of a Dougherty County deputy is being held at the jail without bond after violating a court order.
Albany Herald On-line, GA
J.D. SUMNER
January 21, 2008
ALBANY — The estranged husband of a Dougherty County Deputy has been charged with violating a restraining order after investigators believe he may have stolen his wife’s handgun and pepper spray while vandalising her home. Michael Fenn, 28, is charged with violating a temporary protective order after his wife, Deputy Michele Fenn, discovered her home had been ransacked and her service weapon stolen Friday, according to police reports. He’s being held without bond at the Dougherty County Jail... According to the report, the first floor of the home sustained significant damage after someone covered her personal items with black and white house paint, flooded the bathroom by leaving water running in the tub, and stolen a 380 magnum handgun and some clothing... Fenn’s Dougherty County Sheriff’s Uniforms, handcuffs, pepper spray, assorted electronics, a piano, and appliances as all being damaged. The estimated cost of the vandalism was more than $10,000.
[Full article here]
on 1/21/2008