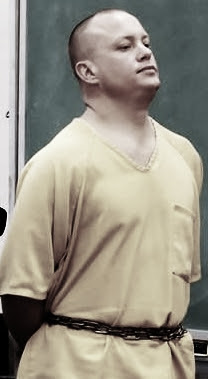 Defense attorney Bernie Davis knows the Larry Evans case is just beginning. "You're going to cross all the t's and dot all the i's in a case like this," he said. Evans, 39, of 3085 Robinson Road, Epworth, was ordered held without bond during his arraignment Friday in Richland County Common Pleas Court. Magistrate Garry Dalbey said attorneys could file a motion for bond "when they deem it to be appropriate." Evans was indicted on 19 counts by a special grand jury Monday. He could receive the death penalty if convicted of the shooting deaths of his brother, Brian Evans, 37, a Mansfield police officer, and neighbor Robert Houseman, 44, of 3083 Robinson Road. The shootings happened outside Larry Evans' residence in the early morning of Dec. 26. Brian Evans went there to check on Larry's well-being after Larry reportedly got upset and left a movie theater... Evans faces the death penalty because of "the purposeful killing of two persons... and that a victim, Brian Evans, was a law enforcement officer when shot to death by Larry Evans." Evans also was indicted for the attempted murder of his sister-in-law, Trina Evans, and his sister, Kimberly Evans, who both were injured; his wife, Carolyn Evans; and four police officers... Evans, a corrections officer at Mansfield Correctional Institution, wore a drab yellow Ashland County Jail jumpsuit...

Slain Mansfield police officer will receive 'line of duty' funeral rites today
By MARK CAUDILL
News Journal
12/29/2007
Officer Brian Evans will be buried today as a hero. Authorities have ruled Evans, 37, died in the line of duty early Wednesday at his brother's residence. He will be honored with "line of duty death services" at this morning's funeral. Evans is being credited with saving [Carol Evans] his sister-in-law's life. Larry Evans, 39, of 3085 Robinson Road, Epworth, is charged with two counts of aggravated murder and one count of attempted aggravated murder for reportedly fatally shooting his brother and his neighbor, Robert Houseman, 44.... "At the present time, we can confirm that Officer Evans arrived at the residence with his sister-in-law, the wife of suspect Larry Evans, in Larry's truck. Officer Evans exited the vehicle and ordered Carol Evans to immediately leave the area while he confronted Larry, who is believed to have already shot his neighbor in the driveway of the duplex residence," [Chief Phil] Messer said... Debbie Spurlock is Larry's sister-in-law and Carol's sister. She tearfully defended him Friday. "Larry's sick," she said. "This is not Larry who did this. It might have been Larry's body, but it was not Larry's mind." Prosecutors noted his "psychiatric problems" in asking for a high bond. Spurlock said her brother-in-law had been struggling recently. "He was getting a survival kit," she said. "He was living a movie, protecting himself." Spurlock said Larry and Brian were best friends and said Larry must have "snapped... Larry's a good, good person. Everybody needs to know that." Brian Evans reportedly was trying to help his brother when he was killed. Messer explained why the officer is credited with being killed in the line of duty. "While Brian was the brother of Larry Evans, he was compelled to act or be called to duty as a sworn officer, regardless of his relationship to the offender," the chief said... Evans was a third-shift patrolman. A member of the Allied Special Operations Response Team, he also was certified in crisis intervention... "The fact that this was his brother makes the events even more tragic; however, it cannot be disputed his act to intervene instead of leaving the vehicle with Carol Evans clearly saved her life and demonstrated his commitment to our oath... Yes, there may be a few among us who would have confronted such a situation in the same manner as Brian -- the everyday heroes we read about from time to time -- but there are those we expect to respond, our police officers and firefighters, what we call our hometown heroes"...

Mansfield officer killed
Brother surrenders after shootings; neighbor also fatally shot
The Columbus Dispatch
By Dana Wilson
December 27, 2007
Officer Brian Evans had trained for situations like this. A man was firing shots from his house early yesterday morning, terrorizing a rural Richland County neighborhood. Evans, a 14-year veteran of the Mansfield police department and a member of the countywide SWAT team, was off-duty but raced to help. It was his brother's home, and Evans' decision cost him his life. Larry and Brian Evans had been to a movie Christmas evening with other relatives. Larry Evans had left early and his brother was worried, authorities said yesterday. When Brian Evans arrived at the house in Weller Township northeast of Mansfield around 1 a.m., he likely was unaware of the extent of the situation, that his brother already had fired shots at two or three other people... Larry Evans' gunfire killed his 37-year-old brother and a next-door neighbor, 44-year-old Robert L. Houseman, Richland County Sheriff J. Steve Sheldon said. Wounded were Brian Evans' wife, Trina, and his sister, Kimberly. Neither woman's injuries were life-threatening. Larry Evans, 39, a guard at the Mansfield Correctional Institution, surrendered to deputies a few hours later...
on 1/05/2008