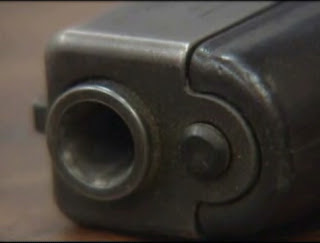 Prison term for officer's bride
Around The Valley
Daily News of Los Angeles (CA)
January 8, 2008
A Los Angeles police officer's bride pleaded no contest Monday to attempted voluntary manslaughter for shooting him twice at their Reseda apartment and then trying to run him over at a bus stop. Van Nuys Superior Court Judge Martin Herscovitz immediately sentenced 39-year-old Yolanda Yvette Cade to 10 1/2 years in state prison, Deputy District Attorney Edward Nison said. Authorities said Cade shot her husband of about a month in the arm and lower body July 1, 2006, after she found a text message on his cell phone that she believed was meant for another woman. Police said she followed her husband in the family's SUV and tried to run him down, barely missing a woman at the bus stop. Along with the charge involving her husband, Cade pleaded no contest to assault with a deadly weapon involving that woman, Nison said.
on 1/08/2008