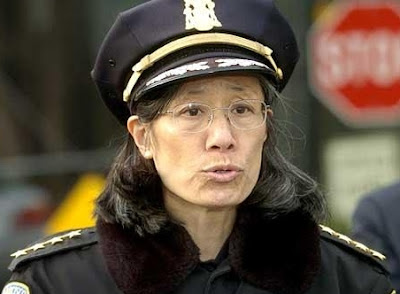 Did deputy chief's son get favorable treatment?
No report filed in incident involving rookie police officer
San Francisco Chronicle
Jaxon Van Derbeken, Chronicle Staff Writer
Wednesday, January 23, 2008
[Excerpts] ...Meanwhile, the 23-year-old officer has been placed on administrative duty... The report came from a friend of a woman who recounted that she had been threatened by an off-duty officer whom she had been dating. The caller said the woman had locked herself in a bedroom and the officer was in the bathroom. Police then spent more than an hour at the apartment... but left without having written any official report of the incident after the woman insisted she was not threatened or abused in any way. That decision came after an acting night commander consulted with Deputy Chief Tacchini about what to do about his rookie son.... Mayor Gavin Newsom learned of the matter on Tuesday, according to his spokesman Nathan Ballard. "The mayor backs the police chief's decisions," Ballard said... Once at the scene, according to an account provided to The Chronicle, Sgt. John Braganolo met the younger Tacchini, 23 - who was nearly finished with his field training at Southern Station and whose father is the newly promoted head of the SFPD's patrol bureau... The woman told the police that nothing happened... She later said that Tacchini was a "great guy and she did not know what happened to cause all this." More than an hour after police reportedly arrived, at 4:22 a.m., the case was closed without a police report being completed. Tacchini was not tested for alcohol consumption. The decision came after the acting night supervisor, Lt. Larry Minasian, responded to the scene... Minasian, after purportedly speaking to Deputy Chief Tacchini, explained to the woman that, based on her account, no criminal activity occurred... The woman repeatedly and adamantly emphasized there was no criminal activity... The woman's male friend made the 911 call and later arrived at the apartment. He wrote in his own account to police... Authorities within the department, speaking on condition of anonymity, said the matter was mishandled and created an appearance of cover-up. "I think that there is an incident report that should have been made," said one of the authorities said. "This thing was bungled"... Fong said Tuesday she had reviewed an account from someone at the scene that prompted questions in her mind...
on 1/31/2008