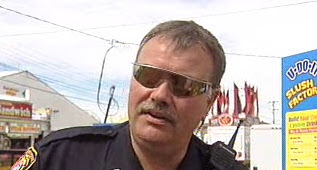 If you have any information about this shooting, please call Memphis Crime Stoppers at (901) 528-CASH.

...Investigators have no suspects in custody and are still on the scene questioning potential witnesses...

Memphis police officer shot to death at home
commercialappeal.com
By Bret Weaver
January 28, 2008
Lt. Ed Vidulich, 51, of the Memphis Police Harbor Patrol was found shot to death early Monday morning. He was discovered after midnight in his home in the 3400 block of Shilo Street in Frayser. His car was found several blocks away in the 1600 block of Winston Drive and had been set on fire, according to Memphis Police. Investigators have no suspects in custody and are still on the scene questioning potential witnesses...

Updated 7:08 a.m.:
Memphis Police Officer Found Shot And Killed In Frayser
Eyewitness News Memphis
Last Update: 7:10 am
An off-duty Memphis Police Officer was found shot and killed in his home in Frayser. It happened in the 3400 block of Shilo in Frayser near North Watkins. Police say they were called to the scene of a burning car in the 1600 block of Winston around midnight, Monday, January 28, 2008. According to investigators, that car belonged to Lieutenant Ed Vidulich. Detectives say when police arrived at the officer’s home, they found him shot to death in his kitchen. Police do not yet know why the officer was shot... Investigators say his wife was at work at the time of the shooting.

Note: Posting Lt. Vidulich's slaying here is not to indicate family foul play but because the suspect is still at large.
on 1/28/2008