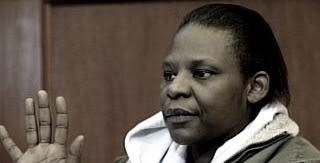 Ex-Holyoke police sergeant sentenced in double shooting
The Republican
By BUFFY SPENCER
January 19th, 2008
A former Holyoke police sergeant was sentenced today to 12-15 years in state prison. Tammy Walker had pleaded guilty to a number of charges in the Dec. 31, 2006, shooting of Rochester Johnson, 52, at his Chicopee home. Walker's estranged wife, Kathleen M. Donoghue, and Johnson, who was Donaghue's boyfriend, were both in the 100 Angela Drive home when Walker entered with a loaded gun and 43 rounds of ammunition. Hampden Superior Court Judge C. Brian McDonald said he realized the good Walker, 45, had done in her life before her mental health began to unravel. He said he had to fashion his sentence taking into consideration the nature of the crime, which could have been even more of a tragedy. The prison sentence will be followed by five years probation... Walker was sentenced on charges of armed assault in a dwelling with the intent to commit a felony, assault and battery with a dangerous weapon, illegal firearms charges and threat to commit a crime (murdering Johnson). Forsyth read statements from Johnson and Donaghue, who were both in the courtroom. Donaghue said that Walker was someone she had loved and trusted but Walker had had increasing outbursts of anger. Donaghue said she is worried that Walker will harbor anger while in prison, blaming Donaghue instead of herself, and will get revenge, no matter what, when she gets out. Johnson and Donaghue both said that they are suffering from extreme anxiety since the attack and cannot live their lives as they had...
[Full article here]
on 1/22/2008