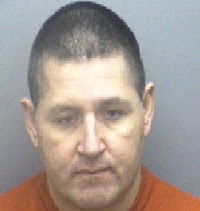 Deputy accused of stalking ex-wife free on bond
Evansville Courier & Press
By Kate Braser
January 19, 2008
A suspended Vanderburgh County Sheriff's Department deputy accused of stalking his ex-wife is free on bond, but must remain on GPS monitoring and he had to surrender his firearms to the Sheriff's Department as a condition of his release. Raymond E. Reason, 42, was arrested Thursday and charged with stalking, a Class C felony and invasion of privacy, a Class A misdemeanor in a case in which he is accused of harassing his ex-wife, despite a protective order issued last month... According to a probable cause affidavit filed in the case this week, Kimberly Reason told investigators that on Dec. 26, she saw Reason and the two had a brief conversation. She said after that, Reason began to contact her more frequently, and she began to feel intimidated. On Wednesday, Raymond Reason voluntarily went to the sheriff's command post and spoke with Lt. Larry Craddock about the allegations. During that interview, he reportedly admitted to contacting his ex-wife, and said that when he found out she was dating, he drove by her home to get the license plate number of her boyfriend so that he could learn the name and address of the man...
on 1/20/2008