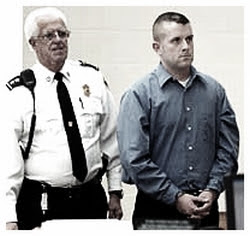 ..."It appears all of these factors contributed to the indictment being sought by the district attorney, and we applaud him for taking them seriously," she said. "Too often, we see those risk factors go without due diligence on the part of the court system."...

Previous entries:
Duxbury Officer Indicted for Assault with Intent to Murder
Duxbury Clipper
Adam Swift
Tue, Jan 29 2008 17:38
[Excerpts] A Duxbury police officer accused of assaulting his girlfriend has been indicted on 10 charges by a Norfolk County Grand Jury. Sean P. Moran, who is currently being held in the Dedham House of Corrections, was indicted on charges of armed assault with intent to murder, intimidation of a witness, assault and battery with a dangerous weapon, two counts of assault with a dangerous weapon, malicious destruction of property over $250, three counts of assault and battery and threatening to commit a crime... Moran is accused of assaulting his girlfriend, a Milton police officer, on two occasions in Quincy. In November, he allegedly slammed his girlfriend's head into a chain link fence following a surprise birthday party she threw for him, and in October, Moran allegedly wrestled his girlfriend to the ground at their Quincy home and pulled her service revolver on her... [Quincy District Court Judge Mark] Coven said he believed Moran presented a threat to his girlfriend and that he did not believe the violence could be solely attributed to Moran's drinking...

Officer indicted in abuse case
Girlfriend alleges beatings, threat
Boston Globe
By Milton J. Valencia
mvalencia@globe.com
January 23, 2008
[Excerpts] ...The girlfriend told police that the attack had been the latest of what she called ongoing abuse. The two had been dating for two years, she said, and in that time Moran threw her against a wall and broke furniture. Just weeks before the November incident, Moran allegedly pointed a gun at his girlfriend and ordered her to leave the home. Then, he pointed the gun at himself and said he would kill both of them if she ever told anyone. Toni Troop, a spokeswoman for Jane Doe Inc., a statewide coalition against domestic violence and sexual assault, said the case involving Moran and his girlfriend had all the makings of a relationship that could have turned more violent. His access to a gun and alleged history of violence were risk factors that should be taken seriously. "It appears all of these factors contributed to the indictment being sought by the district attorney, and we applaud him for taking them seriously," she said. "Too often, we see those risk factors go without due diligence on the part of the court system."

Duxbury cop indicted for assault, and threatening to kill his girlfriend
Duxbury Reporter
By Andria Farrell
Thu Jan 24, 2008, 11:49 AM EST
[Excerpts] ...the victim was hesitant about having Moran arrested because she feared for his well being... on a previous occasion Thursday, Oct. 18, the victim returned home around 2 a.m., during her shift at work, to walk her dog. The couple got into a heated argument and Moran wrestled her to the ground, removed her service revolver from its holster and threatened to kill her if she didn't leave. When she said she would report him, he threatened to kill himself he said. Assistant District Attorney Katherine Cappelli of the Norfolk District Attorney William Keating's office said at the hearing, the victim, who was not present, feared for her safety. She said over the course of the couple's three-year relationship the victim recounted at least five instances of abuse. Prior to the most recent incident Moran told the victim he would get help she said. Moran's attorney John Gugliemi, attempted to find a secure treatment facility for Moran as an alternative to jail, but could not find a secure location that satisfied the Coven's demands. Gugliemi argued that Moran's actions were a result of job stress, relationship stress, and the use of alcohol...
[police officer involved domestic violence oidv intimate partner violence (IPV) abuse law enforcement public safety lethal massachusetts state suicide suicidal ticking time bomb]
on 1/30/2008