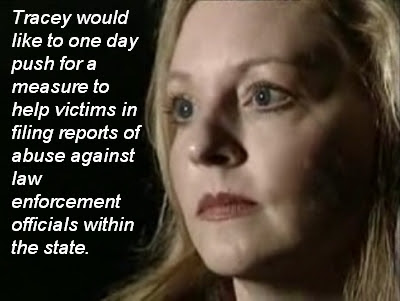 The high-ranking 16-year law enforcement veteran St. John Parish Sheriff's Lt. Allan Wayne Schaeffer was just fired in October after Tracey Mutz, his ex-girlfriend, filed domestic violence charges on him. He's charged with aggravated rape and 2nd degree battery on her. Two other women are accusing him as well. 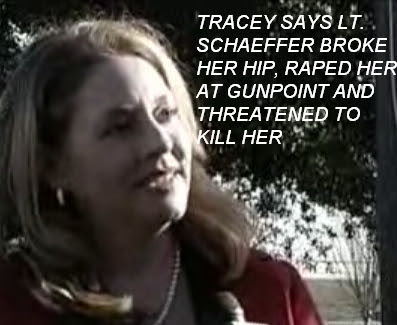 Ex-St. John deputy pleads innocent
Accusers say he used badge to coerce sex
By Victoria St. Martin
River Parishes bureau
January 25, 2008
...a former St. John the Baptist Parish sheriff's lieutenant shuffled into a courtroom Thursday and pleaded innocent to charges of aggravated rape, second-degree battery and attempted sexual battery. Allan Wayne Schaeffer entered the plea shortly before noon with his court-appointed attorney by his side. Schaeffer faces life in prison on the aggravated rape charge... Schaeffer, 47, a 16-year law enforcement veteran, has been held in St. Bernard Parish in lieu of a $335,000 bond since he was indicted by a state grand jury Jan. 14. Snowdy denied a request for bond reduction after state prosecutors said Schaeffer used his badge to intimidate his alleged victims... In denying the bond reduction, [State District Judge J. Sterling] Snowdy said the indictment alleges Schaeffer exercised his power with "great disregard"... Schaeffer was fired from the St. John Sheriff's Office in October after a State Police investigation, which stemmed from a domestic dispute complaint filed by a former girlfriend, Tracey Mutz. The findings of the investigation were turned over to the state attorney general's office by St. John District Attorney John Crum. Crum recused his office from the case, noting his office's close ties to the Sheriff's Office... Schaeffer is charged with one count of aggravated rape in connection with a November 2005 incident and one count of second-degree battery in connection with a May 2006 incident, both involving Mutz. An attempted sexual battery charge, according to the indictment, stems from a February incident involving another woman, Lisa St. Martin, who said Schaeffer tried to force her to perform a sex act... It is The Times-Picayune's policy not to identify the victims of sexual assaults, but the women who brought charges against Schaeffer waived that confidentiality and have appeared publicly in televised and other news reports to explain their allegations. Mutz said Thursday that she would like to one day push for a measure to help victims in filing reports of abuse against law enforcement officials within the state. "We've made one step forward today," Mutz said after hearing about Schaeffer's plea. "It's a sad day but a good day in itself. I hope after all of this is done, law enforcement agents will think harder before they choose to abuse someone"... 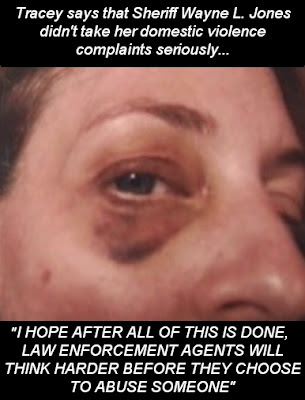 ...“This is a very emotional day for obvious reasons and I cannot help but to think if appropriate action were taken in 1999 when formal complaints were filed against Mr. Schaeffer maybe none of us would be here today,” alleged victim Tracey Mutz said...
Source: Former Deputy Charged With Sex Crimes, WDSU, January 14, 2008

Grand jury considers rape case against ex-deputy
The Times Picayune
By Victoria St. Martin
Tuesday, January 15, 2008
... One of the women, who told State Police investigators that Schaeffer tried to sexually assault her while they were parked behind the parish jail... "I hope he is arrested," said Lisa St. Martin, 30, of LaPlace, "and justice is served"... Another woman, Tracey Mutz, a former girlfriend of Schaeffer's who claims [Sheriff Wayne] Jones did not take her accusations of domestic violence seriously, said Schaeffer was indicted late Monday evening. Mutz said an attorney from the state's attorney general office held a meeting with her and the other women and told them that Schaeffer was being taken into custody... Authorities have said Schaeffer failed polygraph tests in connection with both complaints. A week before being fired, Schaeffer was placed on suspension with pay. But after Jones met with the district attorney's office, at the close of the State Police investigation, Schaeffer was fired.... "It's very emotional," Mutz said of the news of the indictment. "I can't even explain the way I feel; I'm sad but I'm relieved - he won't be able to hurt anyone else. It's hopefully the beginning of the end." 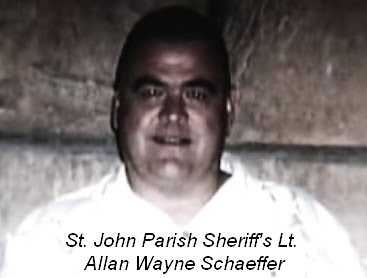