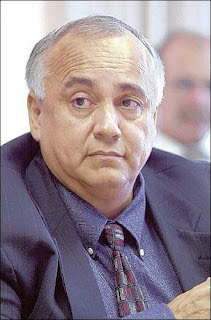 [So where can victims turn for help?]

Two temporary restraining orders filed against former Albuquerque Police Chief Sam Baca by his wife and daughter have been dismissed....

Orders Against Ex-Chief Dismissed
Albuquerque Journal (NM)
T.J. WILHAM
January 15, 2008
Two temporary restraining orders filed against former Albuquerque Police Chief Sam Baca by his wife and daughter have been dismissed. In November, Baca's wife and daughter filed for restraining orders, citing an alleged history of abuse dating back 40 years... After a series of hearings, Reed Sheppard, a District Court hearing officer, dismissed the women's restraining orders and their petitions seeking a permanent one last week, saying they "failed to meet burden of proof." "I stand by my innocence," Baca said Monday... He has also filed for a restraining order against his wife, claiming she had attacked him in the past. A hearing has yet to be held on that request.

Baca Restraining Orders Dismissed
The Ledger
January 13, 2008
Two temporary domestic violence restraining orders against former Lakeland police chief Sam Baca filed by his wife and daughter were dismissed Wednesday in an Albuquerque, N.M., court, according to a news release from his lawyer... Domestic violence accusations by Baca's wife, Vera Baca, were determined to be unfounded, and his daughter, Jennifer Baca, failed to meet a minimum standard of proof in her petition for a restraining order... Vera Baca had submitted photographs of injuries she said were inflicted by her husband during a Nov. 15 cruise, but upon further investigation, it was revealed that the photographs were taken in December and that the appearance of injuries had been created using eye makeup...
on 1/16/2008