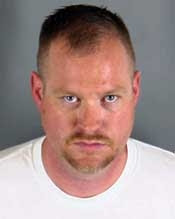 "It's extremely unsettling when someone entrusted to help the community has violated that trust, so we're going to be aggressively pursuing justice in this case," said DA spokesperson Michael Jeandron...

Court drops 17 of 37 charges against former DHS officer
The Desert Sun
January 28, 2008
Seventeen of 37 criminal counts have been dropped against a former Desert Hot Springs police Officer accused of molesting an underage relative over a 10-year span and her friend over a one-year period, according to his attorney. The former officer now faces 20 counts, including aggravated sex assault on a minor, rape and lewd acts, his attorney says. Opening statements are scheduled to begin at 9:45 a.m. Tuesday... The man, who has pleaded not guilty to aggravated sexual assault on a child, rape, lewd acts with a child and other charges -- could get a life prison term if he is convicted of all 37 counts filed against him. The two alleged victims were in the Explorers Program, which allows teenagers to ride along with police and perform tasks at the station. Defense attorney John Patrick Dolan, who expects the trial to last about six weeks, said he plans to challenge the charges filed against his client "count-by-count" in his opening statement...
Alleged Victim in Officer Molestation Trial Speaks
News Channel 3
By Nathan Baca
Jan 28, 2008
...Defense attorney John Patrick Dolan said, "There's really two separate cases here. There's the case involving one of the victims where it is suspected actual sexual relations took place over 10 years. And the only evidence of that is the statement of the alleged victim. There is no other corroborating evidence whatsoever except her statement. Then there's another part of the case which is four counts which is suggesting that certain innocent conduct which takes place at the police department with a police explorer amounted to molestation." The defense mentioned two girls names as alleged victims... "It's extremely unsettling when someone entrusted to help the community has violated that trust, so we're going to be aggressively pursuing justice in this case," said DA spokesperson Michael Jeandron...

From news in October 2006:
[CA] Ofc. D____r $2M bail, 49 felony counts for sex w/own child
Hot Springs Police Officer Dennis D____r was arrested on suspicion of sexually assaulting his child and charged with 49 felony counts of sexual assault, including aggravated sexual assault of a child, and his bail was set at $2 million. "The crimes have been going on for allegedly, the last 10 years," said Ingrid Wyatt, district attorney's office. "With the same 2 female victims?" "Yes." In the divorce he filed just before he was arrested he stated he wants joint custody - with his wife - of the child he is accused of raping. He worked at the high school for two years, then went on to head the juvenile investigations unit of the police department, and was the leader of the DHS Explorer Program for youth. If convicted, the officer faces multiple life sentences. None of his immediate family members attended his arraignment. Morale at the Desert Hot Springs Police Department has taken a hit.

From news in November 2006:
[CA] Officer D____r's 49 kid felonies, divorce timing, & chief is fired
Concerning D____r, Deputy District Attorney Victoria Cameron stated, "If the person that you're supposed to trust is committing the crimes against you, it is one more reason that these crimes aren't discovered until sometime afterward."

From news in December 2006:
[CA] Officer D____r will go to trial for sex on adopted daughter
"I might be pregnant," the stepdaughter told her father, as an investigator listened in on the phone call. "There's no way that you could be pregnant. I had used a condom." Shortly after that call the Riverside County District Attorney's Office arrested D____r. District Attorney Investigator Tom Reid said that Officer D____r molested his adopted daughter in the city police station and began molesting her beginning when she was 5 or 7, and also molested another girl. Both girls are in the Explorer Program, which allows teenagers to ride along with cops and perform tasks at the station. D____r founded and supervised the local program. He is still employed by the city, but on paid administrative leave.
on 1/29/2008